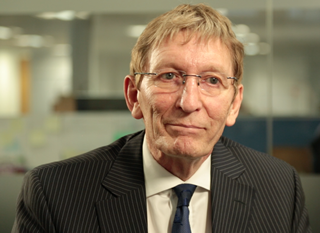 Image Alchemy, a technology company that develops and supplies digital printing solutions, is seeking crowdfunding for a refillable large-format ink cartridge that its MD, Paul Banks, believes will revolutionise the inkjet market.

I asked him to explain the project, outline its possible economic and environmental impact, and where he goes from here.
By Lesley Simpson

You say Image Alchemy is on the brink of something big in terms of ink development, and is currently seeking crowdfunding to help bring it to market. Can you give us an overview of the project?
Well, I come from the photographic industry and I was appalled by the number of ink cartridges I was going through in order to do large-format prints. And I was also shocked to hear of the amount of waste going into landfill and incineration. Some of the data that I came across showed that about 4.5l of crude oil is used to make even a small consumer printer size cartridge carcass.

In recognition of the appalling amount of waste being generated, I’ve developed the Smartridge, which I believe is the world’s first electronic ‘smart’ cartridge. It has a micro-sensor at the top, so as the ink depletes there is an audible alarm, and hopefully through the crowdfunding we are doing, provide an alarm via a smartphone. Then, when the printer is opened, you can see a flashing LED on the appropriate cartridge. You take the ink refill pump to the cartridge where it fastens magnetically. When the cartridge is full it automatically stops, reverses the polarity on the magnet and disengages. That is typically done on a consumer cartridge on 7 – 11 seconds.

For the large-format market we’ve also developed a Smartridge, but here we take the OEM chip from the original printer cartridge, place it into our cartridge where a piggyback chip comes down and that reads the information from the OEM chip and resets it. You just use one of our refills to top up the Smartridge, which will extend a little way out of the printer, so you never have to take it out of the machine. Therefore, the wear and tear is a lot less, you don’t have to do a lot of purging, and there’s not the waste of replacing plastic cartridges.

Image Alchemy’s has relationship with various educational establishments. How does that affect what you hoping to bring to market?
When I first started on this project I went to Leeds University’s department of colour chemistry and we started looking at a number of established OEM inks and leading third-party inks and did a lot of tests. We felt none of the inks were particularly good, and some of the OEM inks were restricted in terms of what we could use, so we set about identifying the various constituents of inks that would provide longevity, wide colour gamut etc. From that we went on and spoke with a number of ink manufacturers around the world and we’re now having a class leading pigment, dye - and soon to be announced - graduated black ink made for us by a leading German ink company.

You won the North West Entrepreneur of the Year award in 2013. How has that impacted upon what you’re doing?
Well it was a great help in that it gave me a factory free to use for 12 months, and I was then able to bring in various students and graduates from the universities around Manchester to work on the problems associated with developing the Smartridge. So I had a team of people, who were volunteers for the most part, looking at the manufacturing, marketing, developing a business plan etc.

As you say, you are currently seeking crowdfunding for the new ‘Smartridge’ to bring it to market. What's the background to that?
Initially we went the traditional route - to the bank and to venture capitalists - and I approached some manufactures who I thought might help me make the Smartridge. I was surprised in fact when one of them turned around and offered to buy the company. But it became pretty obvious that they weren’t really interested in bringing the Smartridge to market - in fact I think they wanted to suppress it! So we went back to the venture capital companies and I received two written offers of investment. But it became clear they simply wanted to sell the IP to the highest bidder, which would have the same effect of stopping the product getting to market.

So in order to fully exploit the Smartridge potential and do it in the way I want to, I decided to go the crowdfunding route. That will mean greater flexibility. I’m also looking for a managing director of the business and this type of investment will allow me to choose the right person rather than be foisted with someone I might not particularly want. I think I can get enough funding in from at least one crowdfunding platform – Indiegogo – to move ahead, and later I might look at Kickstarter.

When are we likely to see the first large-format Smartridge and what inkjet printers will be able to use it?
The first wide-format Smartridge will probably be for the Epson printers because they are the easiest to do. And that will be towards the end of 2015 into the early part of 2016.

The large-format cartridges are actually easier to produce than the smaller ones because you’ve physically got more space in which to put the circuitry. And this circuitry will be programmable, so that should the user want to purchase other inks, it will allow them to purchase those inks automatically because it can be set up have their credit card details etc, will provide a warning via their computer, phone or whatever to say ‘you’re going to run out of ink by XX’ and ask ‘do you want us to order more?’. You will just press ‘yes’ and it will be ordered and you’ll get a confirmation.

Where do you think your R&D will take you next?
We’re actually looking at producing an inkjet printer that doesn’t use cartridges at all - that would have a fixed head similar to a Memjet, and where the substrate moves under that fixed head. There would be ink tanks at the back of the printer which could be topped up, so completely negating the need for replaceable cartridges. It would use water-based inks to start off with.

What about the timeline on that?
The technology is there really but there are one or two issues we need to overcome and how quickly we do that depends on the level of crowdfunding we bring in. Realistically we’re looking at 2016 for the first prototype systems.

A video of this interview can be viewed at:
http://www.imagereportsmag.co.uk/videos/238-talking-point/5902-ir-talks-to--paul-banks-managing-director-image-alchemy-