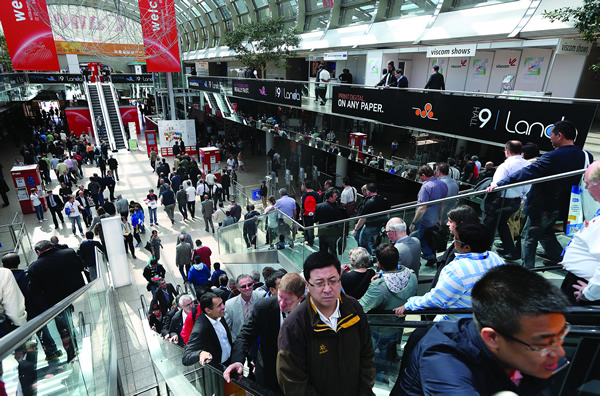 Go to Drupa 2016 and you’ll ‘touch the future’ according to the official show tagline. For ‘touch the future’ read ‘Print 4.0’ – meaning end-to-end digital workflows made possible by the intelligent networking of machines and systems, allowing for more individualisation and personalisation. And digital inkjet is key part of all that.

If pre-show press conferences and announcements are anything to go by, you can expect to see a proliferation of inkjet technologies at this year’s Drupa. OK, the focus will hardly be wide-format, but it will be extremely interesting to see where inkjet developments are taking the print industry per se, and the possibilities they present for profitable participation.

As Drupa celebrates 65 years and its 16th iteration, it continues to morph so that it remains the ‘go to’ print show in Europe. Strategically, that means the event - which will switch from a four to three-year cycle after this year’s show - is increasing its focus on ‘innovative technologies’ to deliver what Werner M. Dornscheidt, president and CEO at Messe Düsseldorf, calls a “comprehensive 360° view of the entire industry”. That means the 2016 event has been divided into six ‘highlight themes’ - print, packaging production, multichannel, 3D printing, functional printing and green printing - pulling together 1,650 exhibitors from over 50 countries. By doing this the organisers hope to attract new visitor groups as well as stalwart trade show goers, and - in a similar vein to Fespa - it will run a creative day (3 June) to also try and pull in those from beyond print’s normal ken.

The Drupa Innovation Parc (hall 7) - or ‘dip!’ as it has become known - is one of those places where PSPs can especially expect to mingle with visitors from other walks of life. This year there will be six sections with around 130 exhibitors. This will complemented by presentations, panel discussions and interviews on the dip! stage. For the first time there will also be an area devoted to successful business and marketing concepts. Details can be found at www.drupa.com.

Visitors of all types would also do well to head to the Drupa Cube (hall 6) which will host an event-long complimentary conference programme structured by The Medici Group to bring together print professionals, creatives, marketers and brand owners. As you would expect given the show tagline, there will be a very strong emphasis on innovation and evolution during times of change and technology convergence. The content will reflect the six ‘highlight themes’ of the show, with talks ranging from 30 minutes to an hour. Full programme details can be found online, as can other show highlights.

As you know, Drupa aims to be all things to all participants in the print industry, so this behemoth of a show can leave you somewhat bedazzled and bemused unless you prepare your ground before setting foot within it. Here we provide a heads-up on launches and major upgrades more pertinent to those in the wide-format inkjet space, but dig around for the more offbeat.

Wide-format solutions at Drupa will include a new three-quarter automation system comprising an automatic board feeder and unloading unit for its Jeti Tauro. The new Acorta 3120 HD cutting plotter, for handling very thick or dense materials, will also be shown.

The company will present a living space printed solely with its inks, and including items such as furniture, wall decoration, countertops, tiles and personal items. It will also run a hands-on printing demonstration of its ‘one ink for all fabrics’ textile ink on various fabric types using one digital printing line.

On show within the Drupa Innovation Parc (dip!) will be the new 3D 28 LPI UV-MF for applications printed on medium-format digital systems, alongside its large-format 3D 20 LPI UV-LF.

At a pre-Drupa press conference EFI chief Guy Gecht said a new printer platform would be unveiled that “combines the great concepts of the Cretaprint, Jetrion and Vutek machines.” It is anticipated that the initial product will be built for colour printed corrugated packaging, but Gecht said it would be developed for other markets like signage. It will run with a new ink that will also be announced at Drupa, and that will be “another combined concept product that takes from our water-based and LED and packaging inks.”

Earlier in the year Epson merged its wide-format, label and textile businesses to create the new Professional Printing Solutions division. The launchpad for the division will be Drupa, where it will show a new 44in-wide SC-P10000, and new features on the multifunction 36in and 44in aqueous SureColor SC-T Series printers. Significantly, it will also introduce a groundbreaking product called PaperLab, a compact dry system for office environments that turns waste paper into new paper.

Epson expects the PaperLab to be commercial production in around 18 months, and it will initially be targeted at businesses and government offices that use high volumes of paper, but it is envisaged that it will continue to be developed for other markets.

It uses Dry Fiber Technology to ‘fiberise’ A4 and A3 toner and inkjet printed documents for recycling, bind the resultant fibres and form new clean paper sheets. The system can produce about 14 A4 sheets per minute and 6,720 sheets in an eight-hour day. Users can produce A4 and A3 office paper of various thicknesses, coloured paper and even scented paper.

Fujifilm used Fespa Digital to introduce its 3.2m Uvistar Hybrid 320, a flatbed/roll printer capable of print speeds up to 195m2/hr and available in various configurations up to nine channels (CMYK, Lc, Lm, Lk, orange and white) - commercial availability is slated from Drupa. Pricing will start at £300,000 plus (depending on configuration).

This is the first Fujifilm printer to incorporate is its Dimatix Q-Class printheads and VersaDrop jetting technology. These heads enable the press to image in greyscale with droplet sizes ranging from 10-30pl.

The Uvistar Hybrid 320 uses a patented tri-lobal belt and six-zone intelligent vacuum system. Additionally, a dancer bar with spreaders keeps difficult roll media from wrinkling before it enters the print area. Rear pinch rollers engage as rigid material moves from the print area on to the exit tables. The printer also has a ‘continuous board’ capability that increases productivity when feeding multiple sheets of the same stock during production.

It is expected that Drupa will provide a launchpad for a combined Rip/workflow solution from these companies, both chaired by Guido Van der Schueren, formerly managing director and chairman of the board of Artwork Systems Group and vice chairman of the Esko Artwork Group. Since taking on the role at Global Graphics in 2014 it has been Van der Schueren’s aim to bring the two companies closer together.

KCI will run a 3D lab + print touchpoint with the intention of bringing together those working in 2D printing/packaging production, and in 3D printing industries to encourage new technological integrations across the sectors. The touchpoint will encompass a daily schedule of interactive presentation sessions. Each presentation will comprise a 10-15 minute talk and will be followed by a question and answer session with the audience.

Eastman Kodak is selling its Prosper inkjet business and related products. Those related products include the Ultrastream inkjet printhead technology that was announced at the pre-Drupa press conference when Philip Cullimore, president, enterprise inkjet systems division and senior VP Eastman Kodak, said that Kodak expected to have “OEMs in most vertical markets, including wide-format” by the end of Drupa.

Landa will hold theater presentations five times a day for the duration of the exhibition. There will be live demonstrations of the Landa S10 sheetfed press for folding carton and POP, the Landa S10P perfecting press for commercial printing, and the Landa W10 web press for flexible packaging and paperboard.

Landa will also be introducing its newest technology, Nano-Metallography - “a zero-waste metallisation process that will halve the cost of metallised printing”. It will be demonstrated on a narrow-web label press.

Order taking will start at Drupa, and machines will start shipping next year.

Xaar has stated that it will launch a new Thin Film silicon MEMS technology platform at Drupa. Details will be disclosed at the show

Zund is teasing the market that it will unveil “an ultra high-performance digital cutting system” at Drupa. Under the banner ‘Double your productivity...”, the company will present a number of finishing solutions, including the “revolutionary new cutter based on growing demand from packaging manufacturers and print service providers.”