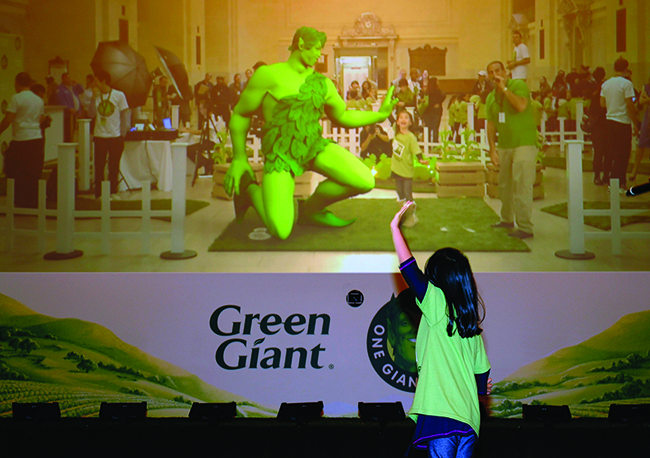 As we experience huge leaps forward in augmented and virtual reality technology, Walter Hale scopes out the possible impact on the digital print market.

“Mankind cannot bear too much reality”, TS Eliot once remarked. Yet we are set to get more reality than ever. On top of the original reality, we can experience an augmented version or a virtual alternative. How will we cope? Will they be of any use? And how will they impinge upon digital printing?

Boeing researcher Thomas Preston Caudell coined the term ‘augmented reality’ in 1990. Asked to devise an alternative to the expensive diagrams, plywood boards and marking devices that guided factory floor workers, he designed a head-mounted apparatus that displayed a plane’s schematics through high-tech eyeware and projected them onto reusable boards. The worker effectively wore the customised wiring instructions which were changed quickly by computer.

The term ‘virtual reality’ was originally used by writer Antonin Artaud in 1938 although, being French, he called it “la réalité virtuelle”. It became more popular in 1982, when sci-fi writer Damien Broderick used it in his novel ‘The Judas Mandala’.

Although augmented and virtual reality are different - the former adding layers to the physical world, the latter wholly immerses you in a 3D alternative to it - they are inextricably linked as far as the public, and the media, are concerned.

Both innovations could influence the future of digital printing. Augmented reality has already been used to enhance national newspaper mastheads (to raise money for the poppy appeal), tickets for sporting events (notably the Rugby World Cup) and mail order catalogues (Canadian clothing company Moosejaw reported a 37% upsurge in year-on-year sales after 75,000 users downloaded from its AR-enabled publication). Some famous brands to have already experimented with AR include: BMW, Cadbury, Google, IKEA, Lego, Lexus, Pepsi and Tesco.

With such big companies interested - and the array of applications ranging from marketing, manufacturing, education and training to healthcare - it is no surprise that Apple (which drops a hint about its intentions for virtual and augmented reality on an hourly basis) and HP (which is looking to fuse 3D printing, Chromebook laptops and what it calls ‘blended reality’) are so interested in the burgeoning technology.

The leaps forward such technologies can offer are so obvious - builders can envisage what a house will look like without even visiting the site, pupils can ‘tour’ cities like Florence without going there, patients with phobias can use VR to safely experience the environments that frighten them - and their future development so exciting - that the real surprise is that VR and AR are not more ubiquitous already.

This may be about to change. Taiwan market researcher TrendForce, for example, estimates that the global market for VR this year will be around £5bn. By 2020, it expects that to more than double to £13bn. Such prognoses seem credible to the trailblazing titans of Silicon Valley: in 2014, Facebook bought Oculus VR, maker of the Rift headset, for £1.3bn, while Apple has made three acquisitions in these fields, most recently snapping up VR start-up Flyby Media.

Apple’s latest deal indicates why it is so hard to gauge where these technologies are heading. Flyby Media’s app sounds gimmicky - it enables users to scan objects from the real world - a hat or a sign for example - and store that item in a collection of shared objects to which friends can send messages. Put that way, it all sounds a bit frivolous, pointless and a bit bizarre. Yet the underlying technology, a great fit for a world in which the internet of things is all but upon us, could prove extremely valuable in ways that we can’t envisage - but presumably, the company’s new VR/AR specialist Doug Bowman can.

So what’s slowing the development of these technologies? For a start, VR and AR require a heck of lot of power. California-based graphic chipmaker Nvidia says that less than 1% of existing PCs have the muscle to handle headsets like Rift (which goes on sale this spring). And the gap between what’s on offer and what’s required is not small: Nvidia says most PCs would need to up their performance by a factor of seven just to cope.

And then there’s cost. A PC fit to run Rift, and the headset itself, could cost £1400 to operate. This is why Oculus founder Palmer Luckey tweeted: “VR will become something everyone wants before it is something every one can afford.” Google’s Cardboard headsets, which turn a smartphone with the right apps into VR viewers, are much cheaper – and very popular. It has recently shipped more than 5m sets to users and, in the last year, 25m apps for the devices have been downloaded. (There are more than 1,000 apps to choose from. The bestselling app, Chair In A Room, is a first person horror story.)

There is also the small matter of what augmenting or offering a virtual alternative does to our minds. If VR headsets don’t respond to the user’s movements fast enough, they can cause nausea. To deliver fluid, natural motions that look ‘real’ to our brains, VR need to run at 90 frames per second (three times as fast as a standard PC game) on two video projections, one for each eye and that takes a lot of processing power.

When VR is perfected, the danger is that it could blur the line between what’s real and virtual so effectively that many people may not be able to tell one from the other. In one 2009 study from Stanford University, a group of children were immersed in a virtual simulation of playing with whales. A week later, when quizzed, half of them thought the simulation had actually happened. As Rob Gear, an IT expert at PA Consulting, told the ‘Financial Times’: “How technologies like VR will play out over time in a mass population is still to be determined. Some people will use it responsibly, and others will use it irresponsibly, to the detriment of their health.”

On a more practical level, some tests have challenged some of the perceived benefits. Research by Siemens showed that people performing a manual task using a head-mounted display did worse than those using conventional methods. So print service providers thinking these headsets could make their pressroom more efficient should probably wait a while.

The other challenge is budgets. How do you figure out how to invest in something if you’re not quite sure what it does - and when the suppliers, like so many vendors before them, are raising unrealistic expectations about what it can deliver?

The fact that AR and VR have come along at roughly the same time hasn’t helped. Comparisons are inevitable, unfair and misleading. Technologically, the advances VR is making are more jaw-dropping. With AR, especially after the comparative failure of the first generation Google Glass, the immediate future looks less mind-blowing, but in the longer term it’s ability to add to whatever is around you - with helpful information, directions and labels - could prove incredibly, lucratively useful.

AR devices now being tested can help people move around stores to find the right clothes, help museum visitors learn more about an exhibit, make it easier for a worker to find the right pallet in a large warehouse, and connect with consumers by adding content to billboards and signage. (Less promisingly, for the signage industry, an AR app in New York enables smartphone users to ‘turn’ subway billboards into works of art, a fiendish variation on the online phenomenon of ad-blocking.)

So to recap, what do we know? AR and VR will become much cheaper and the suppliers will find ways to make them work with less processing power. (In this respect, it will be interesting to see how effectively HR can use the internet to bring 3D and VR to its Chromebook laptop.) The demand for - and curiosity about - these technologies is only going to grow. The hard part is putting a timescale on all this. Yet in five to ten tears from now, it would be no great surprise if AR was being routinely used to make pressrooms more efficient, train new technical staff and add intriguing dimensions to all kinds of wide-format print - from signs to posters and experiential graphics - to wow the consumer and the marketing department.

The future for VR is harder to call. Some industries - tourism, marketing, education, healthcare, automotive - are already using it. Roland DG showcased it at Fespa 2015, with headsets that enabled customers to immerse themselves into any of its creative centres across Europe. The scope for encouraging collaboration across sites and companies - especially for those in the creative sector, or working with it - is immense. Yet even the most exciting technology’s journey from exhibition to marketplace can be long, arduous and unpredictable.

So for print service providers the message is probably: keep an eye on VR and AR, see how they develop and get the inside track from suppliers. Whether you want to be an early adopter probably has as much to do with your company culture, and the kind of work you do (you will need a certain customer spend and scale to make these technologies worthwhile) as with the maturity of the technology. Yet by bringing different dimensions to print, AR and VR could give the medium a new lease of life.