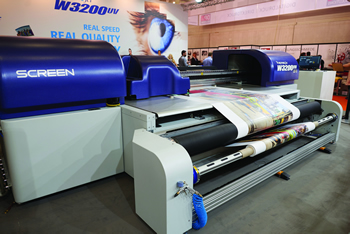 Many printers offer options such as white ink or varnish, but is it worthwhile paying for these extra? Nessan cleary investigates.

We all know that large-format printers use a basic inkset of cyan, magenta and yellow plus black, and some may even include light cyan and light magenta, with many vendors nowadays offering other colours, such as white, as an optional extra. But is it worth paying for these options?

The obvious answer is that it depends on the work you are doing. If you’re printing billboards you probably won’t see much advantage in forking out to achieve special effects. But if you’re dealing with the retail sector, where you can use such effects to distinguish yourself from your competition, you might think it worthwhile. And - so the argument goes - having the capability to produce such effects could allow you to branch out and offer different applications.

But is there really enough work for this to be realistic? The most common printer ‘option’ is white ink, which requires a dedicated channel to recirculate the ink to keep the heavier white pigments in suspension. In the past many would avoid the white option because of potential problems. Firstly, there was a risk that the ink would dry in the nozzles if it was not used enough, so that many printers routinely ‘spit’ white ink to keep the nozzles clear - a waste of ink.

Some of the newest printheads are now starting to address this problem. Epson has just launched a new range of solvent printers, the SureColor S80600 that feature a brand new Epson head that recirculates the ink within the head as well as the tanks and pipes to ensure that the inks remain in suspension throughout the entire system. These printers offer a choice of white or silver ink, both of which have heavy particles that will benefit from this development. Fujifilm Dimatix also offers something similar on its latest Q-class heads, as used in the new Inca Digital Onset X range.

In part, this reflects the popularity of white ink, with most vendors now reporting that 80 - 100% of their customers order printers with the white ink option, plus healthy sales of white ink. But what are these PSPs using the white ink for? Phil McMullin, Epson’s UK sales manager for professional graphics, says: “White inks are very useful if you are looking at the windows market because being able to put the white down before the other inks makes the CMYK a lot more noticeable.”

Paul Adriaensen, marketing manager for Agfa graphics, says that another reason that white ink has become more popular is because the latest inks offer higher density. He explains: “Everything which is backlit requires the dense white because the dense white acts as a diffuser for the light which comes from behind.”

Martijn van den Broek, Screen’s European wide-format sales manager, argues that having white ink on its own is not enough as the printer also needs to be able to print multiple layers, using the white ink to separate those layers.

Screen’s W3200UV can lay down up to eight layers, with different print modes used for each layer. Thus the top layer can be printed with higher quality with the white and black layers flood coated using a lower quality setting that’s faster. Van den Broek says that only a flatbed can do this as it can lay down each complete layer on top of the previous layer, whereas a hybrid will print all the layers together, one swathe at a time, all using the same print mode.

Adriaensen also points out that white ink can be used to print to coloured media, noting: “Black Dibond with white printing or white on brushed aluminium can look very nice, but you have to be able to sell this.”

Additional colours
Some printers do offer additional colours for extended colour gamuts, such as orange, green or violet. However, this is most common with aqueous ink printers that are used for proofing or photographic applications. Most vendors believe that wide-format solvent and UV inks have a wide enough colour gamut that it’s not cost effective to include more colours. That said, extended colour gamuts are common to the packaging industry and there may be a justification for orange, and possibly green for this use.

Some solvent printers do also offer metallic options. McMullin explains: “You can get a metallic shine onto any colour by laying it down first and then putting the colour on top or you can just stick with the basic gold or silver.” However, Epson has had limited success with this option for its SureColor S70600, though another option, light black and orange, has proven more successful, which McMullin puts down to customers trying to hit corporate colours for brand owners.

Van den Broek says that an alternative is to change the relative ink density that is laid down, which can make the colours appear more saturated. However, not all printers allow for this.

Another interesting affect that’s possible with UV printers is to lay down multiple layers of ink, with each dot directly on top of the previous one to build up a relief image. This can create a striking, embossed image, though it will slow the printer down and consume more ink. Some printers are better at this than others – it really comes down to how accurately the printer can lay down each successive ink drop. Van den Broek says: “Some customers use it to make special things for account managers because it helps them to win new business.”

Varnishes and primers
Another possible option is for extra printheads to lay down a varnish or a primer layer. Most vendors report that customers do ask about varnishing. Adriaensen, for example, says: “There are some applications like cosmetics that it really works well for, especially if you can do spot varnish.” He adds: “It’s a nice thing to have in a sales cycle but people will question how much they will use it.”

However, Steve Pridham, for Spandex, which distributes the SwissQ printers in the UK, says that around 40% of the machines are equipped with a channel for varnishing. “It’s a growing market because the varnish can add another dimension,” he adds, suggesting that one reason customers opt for varnishing is in order to produce a more glossy finish that goes beyond the matte finish typical of many UV printers.

It should be noted that some UV printers have enough flexibility in the curing settings to delay the cure to get a more glossy effect. If this were combined with a second layer applied to select areas of the image, you could achieve a spot varnish effect that could be particularly effective for some point of purchase displays, without the need to install additional equipment.

Some machines also offer the option of a primer, though there seems to be very limited take-up of this. Pridham points out that improvements in inks mean that they adhere to a wider range of materials and so there is less need for a primer. It is arguable that primers could make it easier to work with cheaper substrates, overcoming any adhesion problems and saving on materials costs. However, given that it’s relatively easy to apply primer to most substrates manually, there doesn’t seem much benefit in paying to have an extra channel for primer installed in the printer.

Given that most vendors report good sales of white ink there clearly are enough applications to justify ordering the white ink option with a printer. But you may need to consider ordering multiple printheads to overcome the slowdown in productivity. The case for other effects such as further colours and varnishes is not so clear cut, and most wide-format PSPs would probably be better off investigating whether changes to ink and curing settings could achieve similar effects without having to install additional heads. But in most cases there’s a straightforward choice between using these effects to reach new applications, or having higher productivity.