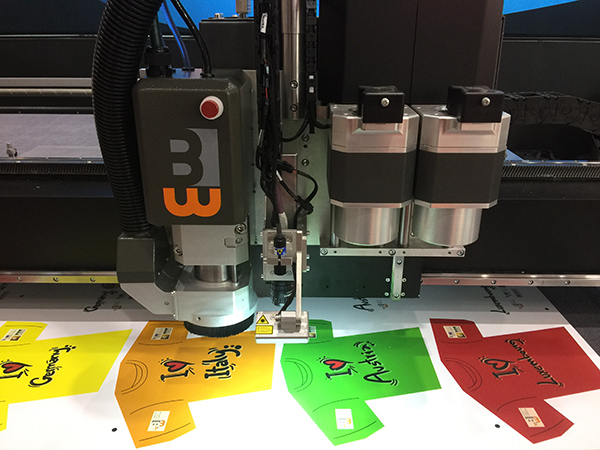 Automation is impacting finishing as it is the rest of the production process. But that’s not the only development focus when it comes to the end game as Richard Stuart-Turner explains.

The arguments for extending your own finishing capabilities in-house are well documented, and one process in particular - cutting - is handled on site these days by practically every PSP. Perhaps it’s of little surprise then that we’ve seen a plethora of new cutter launches and product portfolio extensions here already this year, with automation a key focus as it is everywhere else in the production process.

Zund, for example, showed its recently launched D3 digital cutter with Board Handling System at Fespa 2017 in Hamburg in May. This system allows for automated board loading and unloading, which the manufacturer says means that manpower is only required for bringing in and removing pallets of stacked sheets or boards.

Esko, meanwhile, showed its Kongsberg C60 cutting table at Fespa 2017 with a new automatic feed and stacking system that the company says frees operators from loading and stacking.

Also in Hamburg, Blackman and White demonstrated its new Versa Tech 2, which it bills as an 'all-in-one' finishing system. The machine, which was developed in conjunction with US-based MCT, can be fitted with various tools including a driven rotary cutter, tangential drag knife, oscillating knife, kiss-cutting tool, pen plotting, angle-V cutting, crease tool, 100w CO2 laser and a 5kw water-cooled router. The machine moves at an acceleration of 1.25g and can reach speeds of up to 2,000mm per second.

Blackman and White managing director Alex White says his company's products could be used not just to cut all of the usual substrates dealt with by large-format PSPs on a daily basis, but also for many of the industrial applications that are starting to become more commonplace.

“It's amazing the sort of things that people are printing onto now - doors for example. We've always felt that our machine has been a more industrial solution than perhaps some of our competitors', carrying a stronger router and a more robust transmission system,” says White. 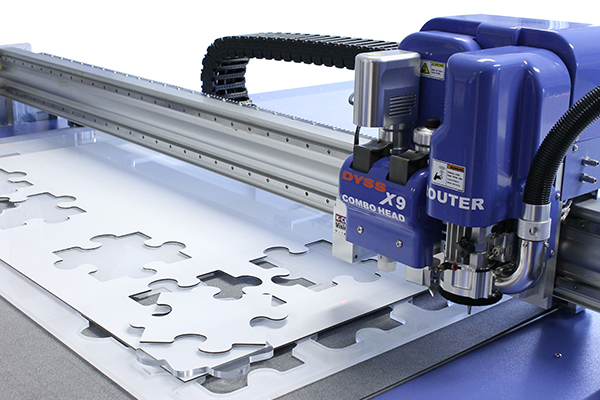 Another new launch in the cutting space is the DYSS X9, available from AG/CAD, which the supplier says incorporates the same functionality and tooling as the existing X7 range, but with a new motion control system that increases production speeds. The machine retains fine control and detail such as small radii while cutting at high speeds, the firm says.

According to AG/CAD general manager Paul Andrade: “The X9 can handle anything that can be knife cut or router cut. Its main aim is non-ferrous metals and all the standard graphic materials. There's very little you can't cut on this machine, as opposed to with laser cutters where you can't cut some materials because of the fumes given off.”

He adds that various levels of automation can be added to the device, including a sheet feeder at the back that loads boards onto the machine, as well as a complete offloading system at the front. “We often find that customers will want a sheet feeder at the back but don't see the point in having an offloading system because they've got an operator working on the machine to handle work as it comes off. These additions also make the machine very long, so space can become a bit of an issue.”

Some interesting innovations in the area of laminators have come in recent times from Vivid Laminating Technologies, which continues to increase not only the range of applications possible with its machines, but also the ease of usability. 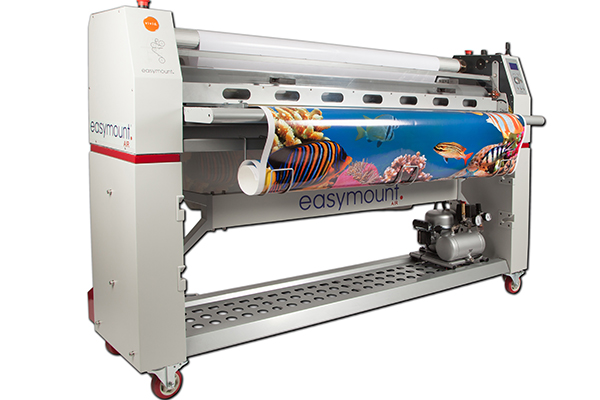 The company says it is currently working on a new optional swing-out arm for both its Easymount Air EM-A1600 SH and Easymount EM-1600 SH models that will make the loading of laminating film easier for users. Two people are typically needed to take the weight of the film and the mandrel, Vivid says, so this addition will be of particular advantage to one-man band operations.

David Smith, marketing communications manager at Vivid, cites the Easymount Air, which uses the pneumatic rollers also used in the Matrix laminators, as the company's most important recent development: “This machine is time saving if you're doing a lot of mounting onto boards, Foamex or Corex - the fact that the pneumatic rollers will lock into place and automatically lock in the height and pressure needed means you can keep feeding those boards through.”

Looking beyond cutters and laminators, a raft of more specialist finishing kit is also becoming available. Take Col-Tec's Smart Collator, for example. It is targeted at PSPs looking to collate work such as POS in order to put together unique packs for each of a retailer's stores. The device is also suitable for short-run collation work.

The Smart Collator is equipped with Col-Tec's Intelligent Data Collating (IDC) application, which the company says enables numerous patterns or combinations of collated sets to follow each other. The machine can process up to 1,000 sets per hour and can collate substrates ranging from tissue paper to corrugated board.

Whether this sort of kit might herald something potentially significant in the way that large-format PSPs handle their packing and distribution going forwards remains to be seen, but at the very least it's an effective way to both automate and increase the efficiency of this type of work, and to add value for clients. 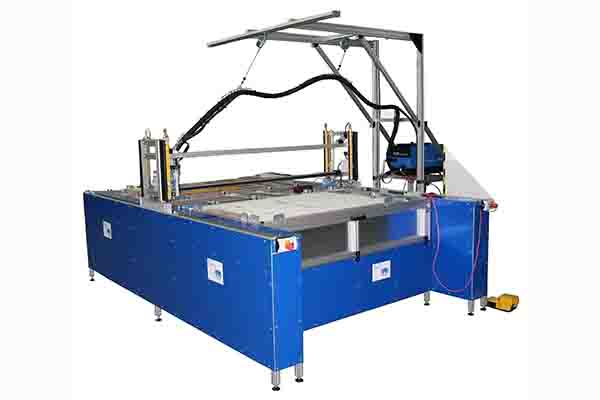 Also possibly useful for PSPs undertaking a lot of POS and FSDU work is Bickers' Gluejet, which Bickers' UK sales agent Finishline Machinery says is safer and faster than gluing by hand. Hot melt and cold glue can be applied in a single application in any geometric pattern using this device, which is said to have strong bonding properties on most substrates. When gluing in a straight line, the machine can achieve a maximum speed of just over 2m per second.

Neil Thayer, managing director and owner of Finishline Machinery, says: “The Bickers Gluejet can reduce both staff levels and the inconsistency of using hand hot melt guns. With this machine you're putting glue down in a robotic fashion, and you're getting the same amount of glue in the same place every time, but you're also getting repeatability - as you can save orders - together with the fact that the machine is running at a set speed.

“It also keeps the tempo of the production at a good level - when it's done manually some people are faster than others.”

He adds: “With this machine you can also use hot melt pressure-sensitive glue in conjunction with PVA cold glue, which is impossible to do by hand. It's with the PVA cold glue that you get the actual strength of the bond, because it sinks into the material and it's far stronger than simple hot melt. To do this by hand is not possible because the cold glue needs approximately an hour to dry.”

While some of the machinery mentioned here shows that there are still pockets of innovation happening in the large-format finishing space, what's even more evident are focused pushes towards greater productivity, efficiency and ease of use as well as continued increases in automation, all of which are ultimately making it more appealing and cost-effective than ever before to bring certain finishing processes in-house.

(Panel – use PICS E - and F if space) Cutting your cloth

PSPs looking to grow by expanding into the textile sector will be well aware of what can be a steep learning curve, particularly when it comes to finishing.

MTEX director Stewart Bell says one of the main challenges is learning about the shrinkage involved with textiles. “Different manufacturers' polyesters and fabrics have different levels of shrinkage so there is always a learning curve for customers starting off with textiles in terms of where to cut it.” 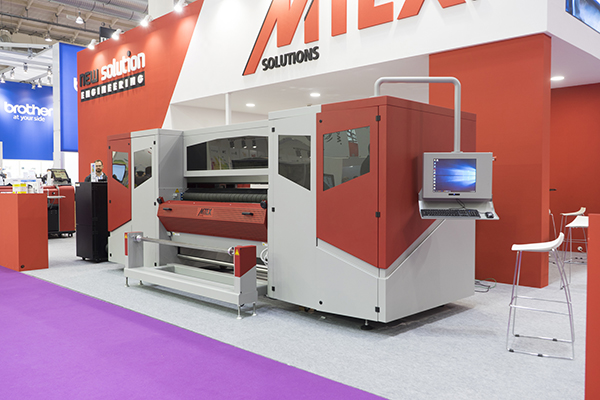 A number of steps need to be taken after printing textiles to ensure that you end up with a quality finished product. One of the most important processes is calendering to make the printed product durable and suitable for washing. Some textile printers incorporate the fixation unit for a one-step process - like MTEX's three new Fespa-launched machines - the Dragon, the Scorpion and the Eagle.

The ability to print direct-to- textile reduces waste and eliminates the need for printing on transfer paper first before calendering or heat-pressing the ink onto the fabric. Other benefits include saving on electricity costs and space and eradicating the need for air conditioning and humidification units that are required by a separate calender.

Whether or not fixation can be done inline does depend on the type of ink you are using. Direct disperse dye-sub inks, which are generally used for sign and display applications, can be fixated inline but reactive and acid inks, used for applications including fashion and swimwear, will need steaming to set them into the fabric.

“The fabrics will then need washing to take away the excess of the pre-treatments and the inks and you then need to dry them and put them through a stenter to reset the original width of the fabric,” adds Bell.

“Pigment inks, which are used for some fashion and home textiles, can be dried inline up to certain speeds, or you would have a separate oven to bake, and then it depends on the application -  if it's going to be used for home textiles then we would always recommend a top coating to go on to give you more durability with the ink.”

Sewing is usually done with traditional sewing machines though a number of devices aimed predominantly at textile finishing are also available. Matic, for example, showed its new Cronos Ultimate automated sewing machine, which is suitable for sewing textile print including flags, displays, curtains, tents and banners, at Fespa.

Textile cutting is generally performed using lasers or knives. Many recently launched multi-purpose machines, including those mentioned earlier from Blackman and White and AG/CAD, are capable of cutting textiles. 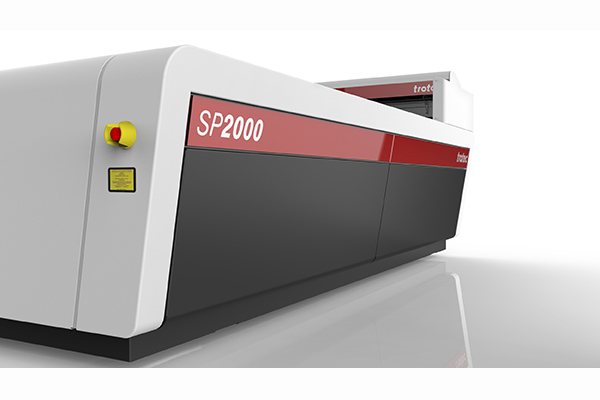 Trotec has recently introduced the SP2000, a CO2 laser cutter with a working area of 1,680mm x 2,510mm that can cut at speeds of up to 2m per second. Andrew Campling, Trotec regional sales manager for the South East, says this machine offers the same benefits as the company's larger SP3000, of high-speed cutting with four-sides access, but on a slightly smaller scale.

One of its key features is Tandem Assist, which enables one half of the machine bed to be unloaded and reloaded while the laser operates on the other half of the bed. This means there is no need to wait for the machine to stop running before preparing for the next run.

“Trotec wanted to develop a large-format laser which answers all of the requirements of a large- format user, where space is at a premium or the size of substrates are smaller than 3m x 2m. Safety and ease of use are key, whist the speed, quality of cut and productivity are at the core of the design,” says Campling.

“It is designed to overcome all of the pains or downfalls which are usually associated with large-format lasers, such as having restricted access to them and personnel having to wear eye protection.”

Campling says cutting textiles with a laser allows for highly detailed, intricate and complex contours to be cut without contact and without any damage or fraying of substrates. Cutting patterns can also be repeated identically as many times as necessary using a laser.

“Laser systems also generally have lower maintenance costs than many competing technologies because no tools are used, there are few wearable parts and the system is very clean.”

Why are you still not happy with off-the-shelf MIS options?

Tax doesn’t have to be taxing