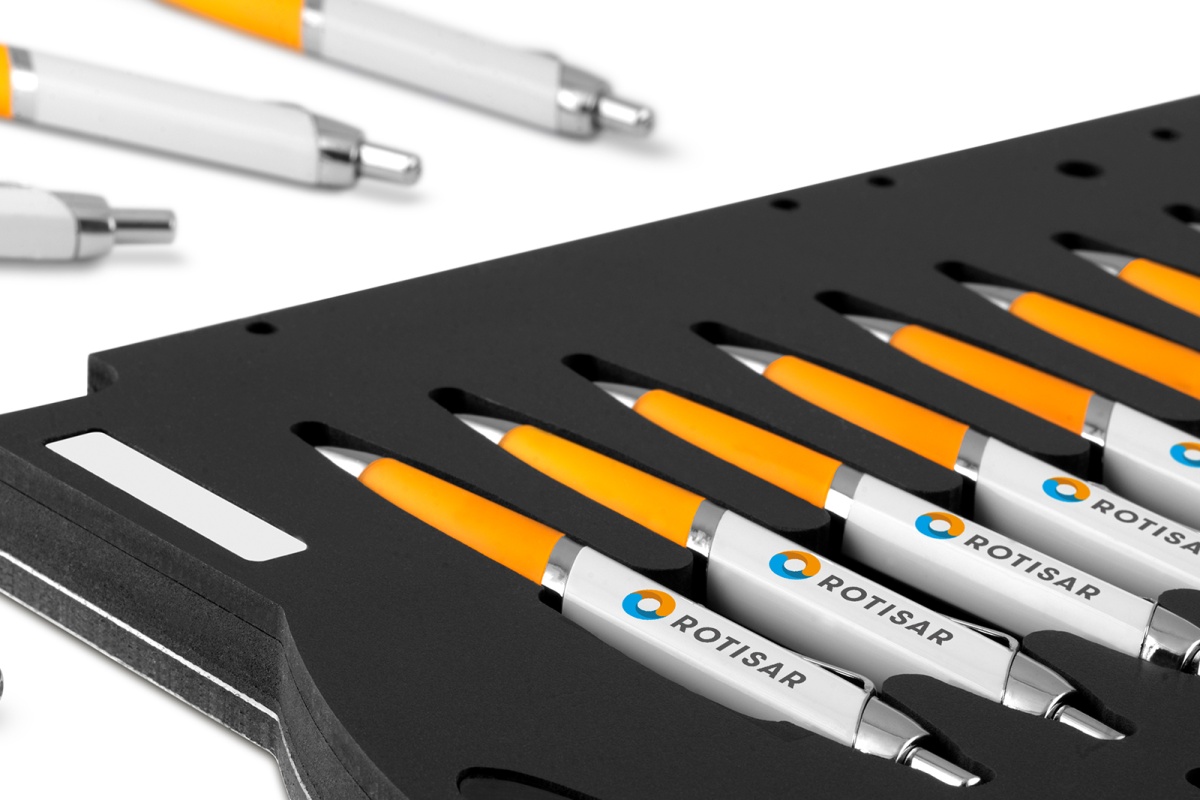 It’s no joke - handling small-format jobs on your large-format kit can really make sense, but some printers are better suited to it than others as Richard Stuart-Turner finds out.

So, you have large-format printers. No doubt you undertake smaller format work on them to fill capacity - and perhaps to leverage the trend for personalised products. While the likes of Mimaki, Mutoh and Roland DG offer various A2 or A3-sized desktop UV flatbed printers specifically for the latter, there’s no reason why you can’t the most of your larger flatbeds to do the same thing, but some are better suited to this than others.

“The JFX200-2531 basically has two control panels - one at the front and one at the back, two independent vacuum units and two lots of origin points. This allows the operator to run the front and back side of the machine independently and to load it while continuing to print. We can also section off the vacuum unit to make it into four different sections.”

He adds: “If you're printing something like pens, to accept the profile of the pen we would want it in some sort of acrylic jig. That could be A3 size or quarter of the size of the bed - whatever size you think is manageable or that your laser router would allow you to cut. You can therefore spec your jig to match the area of where the vacuum units are and it should allow continuous printing.”

The JFX200-2531 can be used to print onto any item under 50mm high but Jeffries says an object needs to have a reasonably flat surface area to facilitate effective printing onto it.

“A barrel of a pen is round, so on a pen I can probably print an 8mm high logo before I drop off the curvature of the pen itself - the same applies with something else with a curvature to it.”

Multiple jigs of various sizes could be placed on the JFX200-2531's bed simultaneously to maximise productivity. Jigs for any flatbed printer can be made in-house, using CNC machines or flatbed cutters, or bought from a supplier such as Digital Blanks, which offers a custom jig making service as well as a raft of standard jigs for popular applications on printers ranging from Mimaki and Roland's small-format flatbeds up to HP's Scitex FB700.

Digital Blanks marketing executive Conor Alden says: “For the bigger flatbeds we'd create a jig which would be in eight separate parts and those would fit together on the bed like a jigsaw puzzle.

“Our most popular jigs are for phone cases and pens. We also have a universal peg board jig that you can put little pins into and then fit the product that you want to print onto in between those pins. This jig holds pretty much any product in place.”

The business also supplies an array of blank objects ready to be printed onto. Two of its unique product ranges, the Contour Digital and Spectrum Max ballpens, are specifically designed with a flat barrel to maximise the print area to its full potential.

One new flatbed printer that is being used by early adopters for a range of small-format jobs as well as large-format work is InkTec's Jetrix LXi8. The machine, which was launched at Sign and Digital UK earlier this year, has already been used to print items including pens and golf balls according to Ben Woodruff, head of national sales at InkTec Europe.

He says the LXi8's ability to print white increases the range of small-format work that could be produced on the machine.

“The white ink capability gives you the opportunity to print onto any clear materials in reverse. So you can do window graphics or acrylic photographs which can be as small as A4 in size but are quite valuable in what you can get per square metre in terms of monetary value.”

One of the ways to handle small-format work on a large-format flatbed is to nest various small jobs together across the bed, on pre-cut or smaller sheets. Alternatively, PSPs with a flatbed cutter could print multiple-up or gang numerous different small-format jobs together onto the same large sheet and cut them out later. While the pre-press and finishing time involved with such a process might seem daunting, it may still prove cheaper than outsourcing small-format work and it also enables you to maintain control of quality and turnaround times.

Going down the small-format route on a large-format flatbed may not always be the best option of course - and even when run lengths etc make sense there are considerations such as media handling to deal with. As only a small section of the bed may be being used, positioning substrates is likely to require more precision - but many flatbeds have functions that can help with this.

“We have a reverse setting function on the Jetrix that blows air rather than sucks it which gives you the ability to move media around into the correct position very quickly,” says Woodruff. “You can push the material into the right place and once it's in position you just change the vacuum to suck rather than blow and away you go.”

“You're really using automation where you want to get the most out of the machine in terms of productivity rather than for odd or small sheet sizes, where it's not particularly efficient.

“To get the best out of the Onset X you would put as big a sheet as you can on there - and people will put multiple images onto a sheet - and then cut it afterwards. Others will put three or four smaller sheets on the bed, laying them on there by hand. They might print small graphics, signs or shelf displays multiple-up, even on a smaller sheet, and then cut them out later.”

At Fespa in May the manufacturer unveiled the Onset M, which can print on substrates ranging from thin papers to plastics, acrylics, glass and sheet metal up to 10mm thick. While this machine - expected to be commercially available later this year - is B1 format, Inca Digital product manager Paul Baker expects some large-format PSPs to use it for short-run small-format work.

“We found that a lot of our customers were putting up to six sheets of B1 on our large flatbeds. Some of them wanted to get to the position where they were doing smaller format work digitally and pushing the quality towards offset. There's no masking requirement as such on the Onset M so that set-up time is eliminated.”

He adds: “This machine could be used to produce shelf wobblers, small signage or labels - we've had quite good results on some self-adhesive plastics. It could also be used for covers for books or smaller packaging.”

While perhaps less common than using flatbeds, there are those of you out there who will be using your large-format roll-fed printers to produce small-format work. Given that most flatbeds use UV ink, the array of ink options provided via roll-to-roll production make sense for some applications.

One PSP that produces a range of small-format jobs using large-format kit is Matic Media. The Glasgow-based company operates 'Web-to-press' service WooWooNails.com, which enables customers to design their own nail wraps - self-adhesive stickers for hand and toe nails - to match their existing fashion accessories.

Matic Media managing director Richard McCombe explains: “We were suffering from seasonality so we were selling these seasonally on daily deals sites in bundles of six or 12. The runs could be as little as one set, which is not even a third of an A4. We were then nesting them up with other orders, so it became batches of lots of things all getting nested together on large-format material.”

The nail wraps are printed on Matic Media's HP Designjet L28500 and L26500 machines. “The client designs the artwork and then signs it off online, submits it and pays for it. That gets banked until 5.30 in the morning, at which point the system takes all the orders, gangs them all up automatically and then puts perforation lines on. It comes out in a batch of six with vertical strips down an A4 sheet, each strip being one set of nail wraps,” says McCombe.

“In the top right hand corner is the client's address and a barcode and the sheet is kiss cut to enable the label and the nail stickers to be peeled off.”

Many of Fujifilm's customers are also using their large-format printers to produce small-format jobs. In August the manufacturer launched its Acuity 15 flatbed printer, which has a 1.25 x 2.5m bed as well as an optional roll-to-roll unit. As one of the inks used on the device is Fujifilm's Uvijet KV ink, thermoforming is an applications option.

“Most of the thermoforming work that I've seen has been relatively small in format - it probably starts out with a sheet size of no more than two-feet square,” says Fujifilm wide-format inkjet solutions manager Steve Cookman.

And with regards to PSPs printing small-format jobs on the manufacturer's roll-fed machines, Cookman adds: “Our Rip solutions offer job ganging and we have applications in our portfolio that allow you to interlock work and automatically optimise print on the sheet in order to save on waste media and production time.

“If we look at our Acuity LED 3200R, a 3.2m-wide roll machine, you can put a couple of 1.5m rolls on it and effectively print different jobs at the same time on either roll. Our high volume customers plan this way and no doubt reap the benefits.”

If taking on small-format jobs is one way in which you can increase your kit ROI, it’s also worth noting that many of the software packages you might already be using are likely to be up to the task as well. Adobe Illustrator, CorelDraw and the like can be used to design artwork for small-format jobs and many printers will also come bundled with software that can be used for the same purpose.