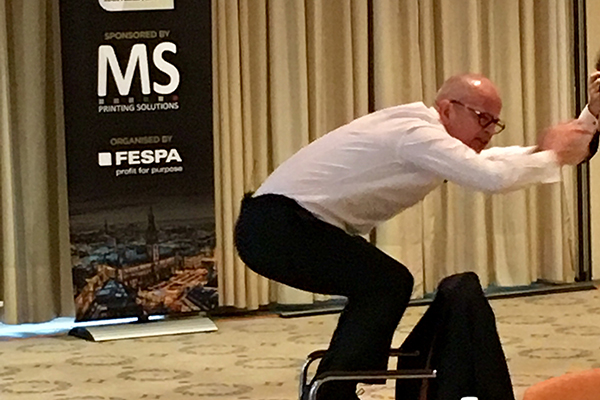 Where competitive ADVANTAGE is concerned it’s all about speed and daring. Here’s what motivational speaker Jim Lawless had to say on the issue at the recent Fespa Global Summit.

“Competitive advantage is all about speed.” That was the opening gambit by motivational speaker Jim Lawless at this year’s Fespa Global Summit in Hamburg. Lawless, author of ‘Taming Tigers’, a self-help guide to doing things you never thought you could, used his talk to explain just how to do so, basing his message on the story of his own successful bet that within a year he could become a jockey in a race on live TV. “I did it though all those in the know around me thought I was mad,” he said - the teaching being that you too can do more than anyone may believe possible.

“Could you take on talent X, or make a go of machinery Y? You’ll never know if you don’t take on the challenge,” extolled Lawless, this time using the analogy of him not daring to ask out the beautiful woman because he thought he’d be rejected and look foolish. “I know that’s what it feels like in business when you want to break out of your norm. No-one wants to be mocked. But don’t be a coward. Have courage and act boldly if you want to win the prize. That’s what elite performers do.”

Great - but how does a PSP translate that into something solid? Lawless of course has a list of tips - or ‘rules for taming the tiger’. He explained in reference to his bet. “I needed help if I was going to achieve my goal, and I started asking around for advice on how an overweight 36-year-old who had never been on a horse could get to be a jockey in a year. Plenty of experts laughed and said it couldn’t be done. But I didn’t want to back down and I did eventually find someone who said they would help. She said we’d make a plan and act on it pretty much immediately. It panicked me - I was sort of hoping in the back of my mind that I’d be let off the hook. But once we’d shook on the plan I was tied in and couldn’t back down because I honour agreements. You need to find something/someone who will lock you in new behavioural patterns to make the changes required. Shake a hand.”

Lawless returned to the feeling of panic at the thought of imminent change. “You encourage your children to move forward by taking risk. You need to practice what you preach and teach yourself that you can do what you’ve never done before. You need to break your own rulebook.”

His next message: get people to help you - not just the hand-shaker mentioned earlier, but from those who can give you space to make change. “Stop micromanaging. Get in experts wherever you need to so you free up time to improve your business. Make sure you have all the business basics covered by changing your diary and staffing. Change happens in your schedule, not just in your mind.”

There was also a nod to the fact that there will always be ‘grandstanders’ waiting for you to take a tumble. “There are always those ‘experts’ in the bar watching a race on telly discussing where things are going wrong and how it should be done. You need to walk out of the dressing room - even when the voice in your head is saying ‘Go home, you have no right to be masquerading as someone who knows what they are doing’ - get on the horse and ride. If you’ve put in the time and effort to train for the event you have every right. You might fall off but take a calculated risk or you’ll never know. Ignore the grandstanders who themselves are not participating.”

Then Lawless said something that surprised a good few in the audience: “Business guru’s would have us believe we’re supposed to embrace failure. It’s not good to fail. So put in the work to succeed. Yes, things will go wrong, but that’s not failure - it’s problems while training. The important thing is to make sure you learn what went wrong so it doesn’t go wrong again.”

And the other essential is to commit. Lawless broke the jockey theme and turned to free diving for a moment

- another of his personal challenges. “Once I’d decided I was going to go through with a 100m dive on one breath of air I had to commit - or I’d die! I knew it was going to hurt because of the pressure on my lungs etc. But you have to say ‘I’m going to push through the hardships if I’m going to achieve.”

“A lot of the time business leaders say they are prevented from exploring an idea because of the money situation of whatever. But the truth is that most of the time it’s about personal reputation and ego. Be brave, and show courage now.”