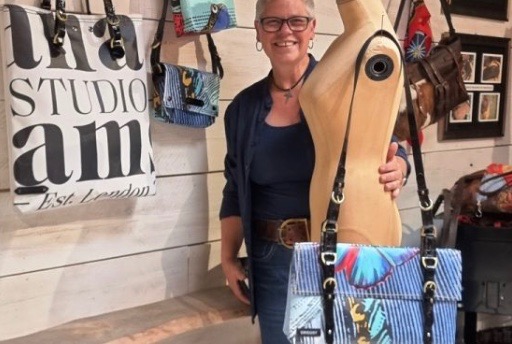 Embrace, which made news recently with its record breaking Selfridges Birmingham wrap, already takes printed scaffolding banners into Banner Karma repurposing scheme. It has now announced investment into Griggsy Bags, covering the initial set-up costs to roll-out the wrap repurposing project. This will involve lifting the working design templates onto scaled pdf templates for laser cutting of three styles of bags and a contribution towards the leather and press-stud embellishments that form part of the distinctive designs.

The move follows a serendipitous meeting between Griggs and Embrace MD Greg Forster in June at Bonds Lifestyle Store near Stratford-Upon-Avon, where she was creating a workshop area to turn preloved clothing and saddlery into wearable art and fashion accessories. Having talked about reuse and repurposing of materials after removal from projects, Embrace the next day shipped eight 1m2 sections of spent PVC and PVC-free printed wraps to Griggsy to carry out initial testing. A week later she had produced several prototypes, leading to the Embrace investment in the new project.

The bagscan be found on the Vintage Rogues website, Easy or in the Bonds Lifestyle store.