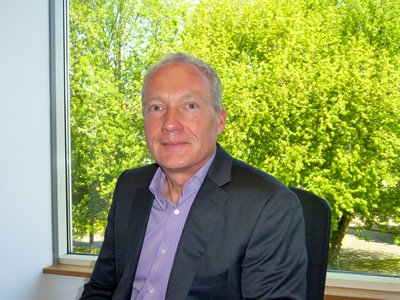 Knowing when to merge and move on is something Graham Clark knows something about, having done it throughout his career, most latterly integrating McKenzie Clark with Icon under Chime Communications parentage. Understanding that bigger can make for better business has been a cornerstone of Clark’s career.

Now managing director for Europe, Middle East and Asia at retail and live event branding giant Icon, he started off in the 1980’s as a photographer before joining Technical Colour Labs (TCL) in Clerkenwell, London, in sales because he found his “strengths lie in winning work rather than being behind the camera”. Before the end of the decade he had become MD and in 1990 embarked on his first business merger, with TCL joining forces with Professional Photographic Services to form McKenzie Clark.

“It’s important to understand all that’s going on around you if you’re to have a sustainable business. Sometimes that requires you to seek partners, so you can create a bigger entity that can invest in a way that allows you to reinvent yourself,” says Clark, explaining that is exactly what was required when the technical revolution of the 1980s hit the photo retouching market.

“Lambda and electrostatic printing were the new kids on the block and it meant that all of a sudden capital expenditure needs shot up and we realised that our business model and direction had to change. It seemed that the best opportunities lay in the print display market, and having won an account with L’Oreal for Duratrans work in 1987 we had a foot in the door. Professional Photographic Services was operating from a site in Peckham, and following its merger with TCL to form McKenzie Clark we bought that site freehold and reveloped it, and became an early adopter of new print technologies, buying Lambdas and three electrostatic machines.

“At TCL we had produced large-format images using old enlargers etc, and once we had the new kit at McKenzie Clark we saw the retail market really open up. They were hungry for new formats and we presented something that was high impact, cost effective and easy to install. We were fortunate that we hit the market a the right time, but also I was young and was willing to take risks,” says Clark.

His direction of McKenzie Clark was to make it a “boutique specialist service” to the retail market, an intention that in 1998 prompted the formation of subsidiary Vivid as “one of the first companies in the UK that offered 3D design and build services to this market.” So far so good – then the recession began to bite, and Clark’s skill at being able to see the bigger picture and visualise the company’s future direction became vital.

“The time of the financial collapse was also the time when we needed to increase investment in technology but that was not compatible with how the industry had become commoditised,” explains Clark. “When I started my career, what we were doing was technical difficult and business was built on being able to handle that and provide a high quality, high end service. But technological development effectively deskilled people and clients started to believe that large-format print was as easy as running a photocopier. At the same time, being a specialist in the retail market when the economic crisis was hitting the high street was not a great place to be.

“It became clear that the business model had to change. We made the decision to become a total design solutions business because we could see that logistics were becoming as important as a good piece of print. And we decided to diversify – the biggest opportunity being sport, largely due to the 2012 Olympics.”

And so we return to Clark’s aptitude for partnership growth. In 2010 the Olympics branding tender process began, with McKenzie Clark throwing its hat in the ring. “We got down to the last eight but then I think it dawned on all of us that the scale and diversity of the project meant there was really no single company in London that could deliver, so we all started looking at partnerships,” he says. In June 2011 McKenzie Clark and Icon were appointed to undertake the work under a joint venture. “Around then Chime acquired Icon and we saw that there was an obvious route to tally integrate McKenzie Clark”, a deal that was completed in March 2012.

“Nothing much really changed until after the Olympics,” says Clark who was by this time joint MD (client services) with Keith Goodwin (production). “The we set about finding a new supersite that would give us the space for project management and print,” he adds, pointing out that since then £1.5m has been invested in the new Sidcup-based operation, largely on new kit.

“The reality is that there are now far more opportunities for progression and international working as a fully integrated company that is part of a group the size of Chime Communications, than I could have ever imagined at McKenzie Clark,” stresses Clarke, who refuses to see big as bad, rather as better.

“There is a perception that bigger businesses can be unfriendly and inflexible, but that’s not been my experience. Here communication with top management is great – they are always available and willing to discuss options. However, Chime is a plc and as you would expect they are stringent so I’ve had to learn that it’s only worth presenting cases that are likely to be successful – that you do all your research first, and think with your head not your heart. It’s a way all businesses should work, but don’t.

So what’s now in Clark’s sights? “In my new role my eye is now on building our international work and on diversification beyond sports, events and retail for Icon in the UK. We are building up commercial and government clients, and want to widen our markets in terms of experiential work – whether that be organically or through acquisition.” And he’s off again…