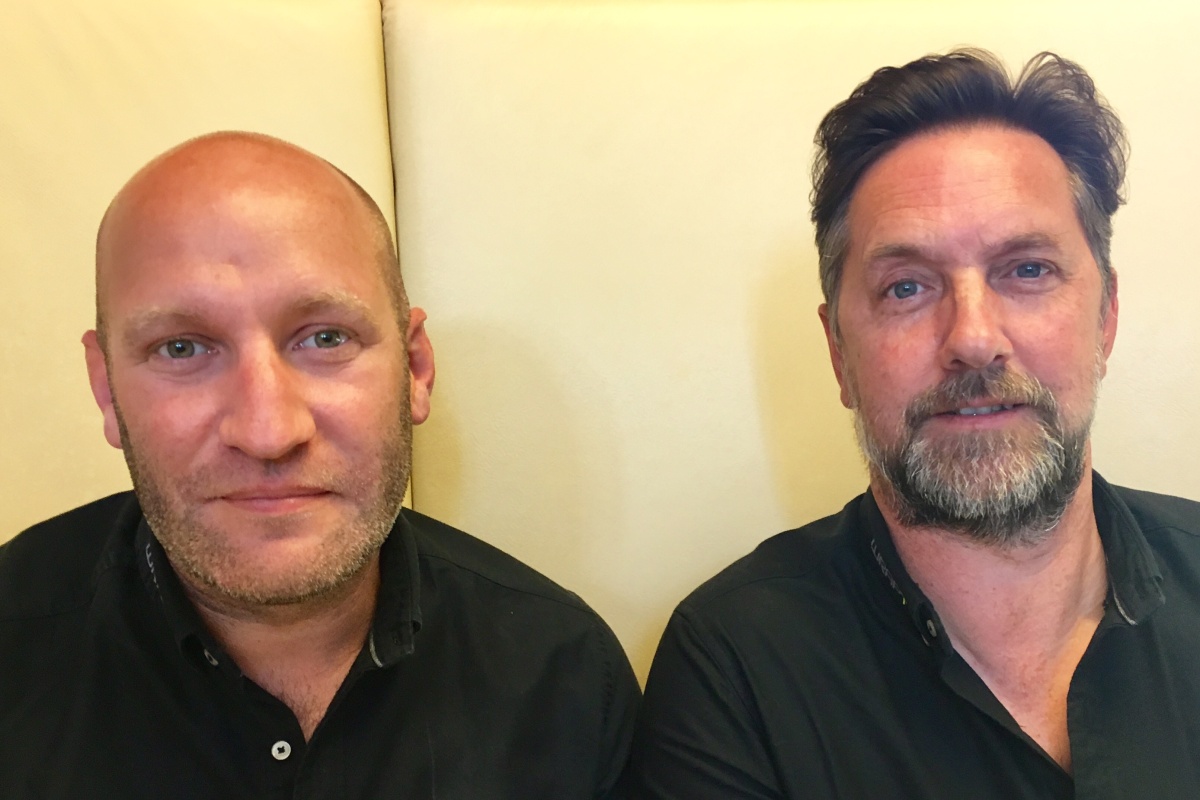 How one Portsmouth-based start-up is ‘refreshing’ interiors with self adhesive vinyls - and how it could be creating opportunity for large-format PSPs.

If you think wrapping toilets in Solihull a come down from wrapping super yachts in the Caribbean I know two guys who would disagree - Ben Morris and Andrew Stuart of Wrapt, a startup company that specialises in non-printed vinyl wraps to ‘refresh’ interiors. Here’s the thing - the pair see huge potential in a space that has seen them win contracts from the likes of BA within the company’s first year of operation. And they can see plenty of scope for working in conjunction with large-format PSPs.

“We are the instigators of the vinyl interiors refurb market,” claims Stuart, who earlier this year joined the company Morris set-up in 2016. “There are no figures available as to the size of the market for what we do because it’s infinite,” he enthuses, hardly surprising given he’s responsible for the marketing/PR side of the business - but Morris concurs with just as much passion.

“I have been hands on in the vinyl wrapping business for years, and spent 15 years wrapping super yachts, a market that demands attention to the finest detail. During that time I got to know the vinyl suppliers and their offerings really well - some of the self-adhesive materials they have now are astoundingly good and there’s a huge range of patterns and finishes. For years I’d thought there must be a massive market in the commercial and retail markets to provide a vinyl wrap service that provided a fast, easy, low-cost refurb option so finally I formed Wrapt,” says Morris, who believes the market is as yet largely untapped.

Basically, Wrapt delivers architectural film installations using self-adhesive laminates that look like real materials - wood, stone etc - and that are resistant to water, dirt, wear, abrasion and mould, require no harsh chemicals to maintain, and can be used to transform walls, ceilings, cladding, furniture, counters…. But there are bigger pluses - they are a lot cheaper than the real materials they mimic, and installation causes much less disruption than the real thing would.

“The reduction in downtime in public areas and spaces that have to make money - like hotel kitchens - is as important for clients as the cost of the job,” says Stuart, Morris adding: “There’s just so much scope. We thought we’d be doing loads of hotels, but we’re realising that hospitals, airports, schools etc. are all eager to refresh parts of their interiors with as little downtime as possible. So we’re getting fabulous response so far for what we do and the business has grown leaps and bounds.”

The first job Wrapt completed was a toilet refurb for a five-storey office block in Solihull. “Off the back of that we got a contract from BA to do toilet refurbs at Heathrow,” says Morris, laughing: “Where there’s muck, there’s brass!”.

“Toilet cubicles cost a fortune to rip out and replace. We can make them look ship shape with vinyl, and clients just can’t believe it,” adds Stuart. “That’s why we try and get prospective clients in on site to see jobs being delivered, and why we do time-lapse videos etc. The key to growing the market and customer-base is publicity.” 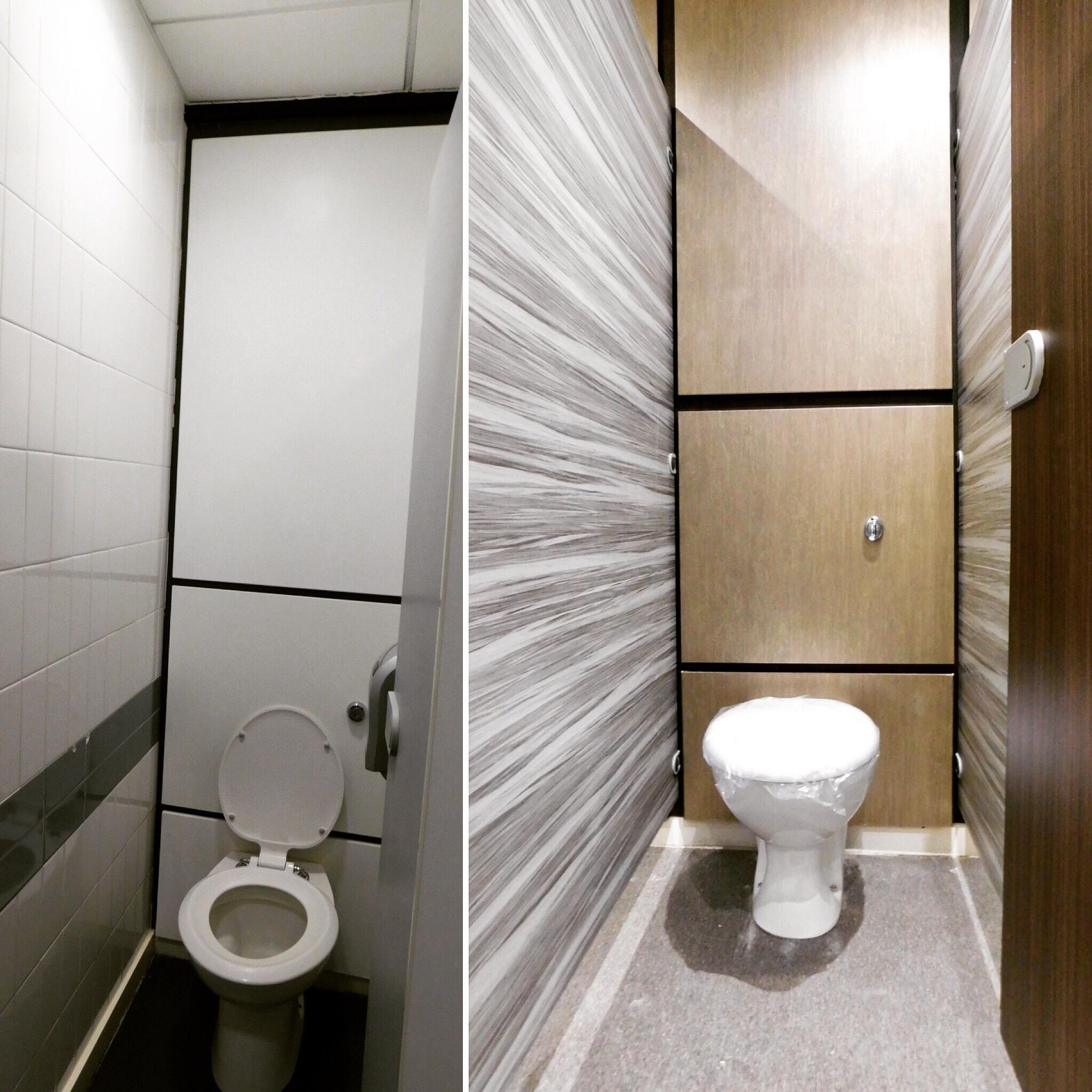 Wrapt is being canny in how it leverages its relationships with its vinyl suppliers – William Smith and David Clouting - to this end, as Morris explains: “We went to the Surface Design Show and ended up on the William Smith stand all day talking to designers and architects about the real life applications potential for some of the films they were seeing. William Smith found it useful to have us there, opening people’s eyes to what could be done so they now want us to do other shows with them. They can see we all need to work to educate potential customers like facilities managers etc. - people who don’t always grasp the concept and think self-adhesive materials are either a throw-back to the 70’s and it’s like putting up some sticky-back plastic or for some sort of big stickers!”

To change that mindset, Morris and Stuart present a joint front approach when attending client meetings. Once jobs are spec’d, priced and agreed they use trusted freelance fitters to deliver the job. “Those can often take a bit longer than you think because people keep stopping them to ask questions because they can’t believe what they’re seeing in terms of the time and finish they are getting on the refurbs,” says Morris. He tends to work alongside the fitters for the first couple of days “to understand any problems that might arise”.

A background in the super yacht wrap business where attention to detail is paramount is proving of crucial benefit to Wrapt’s success according to Morris, who says “a lot of signage companies offer similar vinyl services as an add-on. But they perhaps don’t have the attention to detail that we’re used to. Working inside a building is so much easier than working on a yacht in water!”

But this does not mean he’s dismissing opportunity to work on jobs in partnership with PSPs. Indeed, Wrapt has already done so, though Morris reckons “PSPs would normally use us more than we’d use them.” He says: “We have had a print/signage company call us to say they print some of the same shelf-adhesive stock that we use and we’ve worked with them on a couple of jobs where there’s been some synergy.”

He expands: “The big print houses are used to putting vinyls on flat walls perhaps, but are not so good at working it across doors etc. I could see us working together on jobs that require printed vinyl graphics on flat surfaces and our expertise in installing vinyls in more difficult refurb spaces.

“If a PSP has the right credentials we’d happily look at working together. It may be that a client wants a refresh job that includes a small run of additional house pattern or logo or whatever on the wall. A lot of the vinyls we use are printable, but my concern in working with a PSP that would pre-print before installation is in relation to possible errors. I’d rather put up the vinyl then put something on top of it that carries an area of printed pattern, or logo or whatever.

“Another area where we can see ourselves working with PSPs is where a customer wants to recreate a finish they already have - so a match with an existing wallcovering or whatever. A PSPs could print match it and we could fit it in the difficult areas.”

Whatever the relationship turns out to be between Wrapt and large-format print companies, as increasing attention is paid to interiors ‘refresh’ possibilities the market will expand and present opportunities for more to become involved.