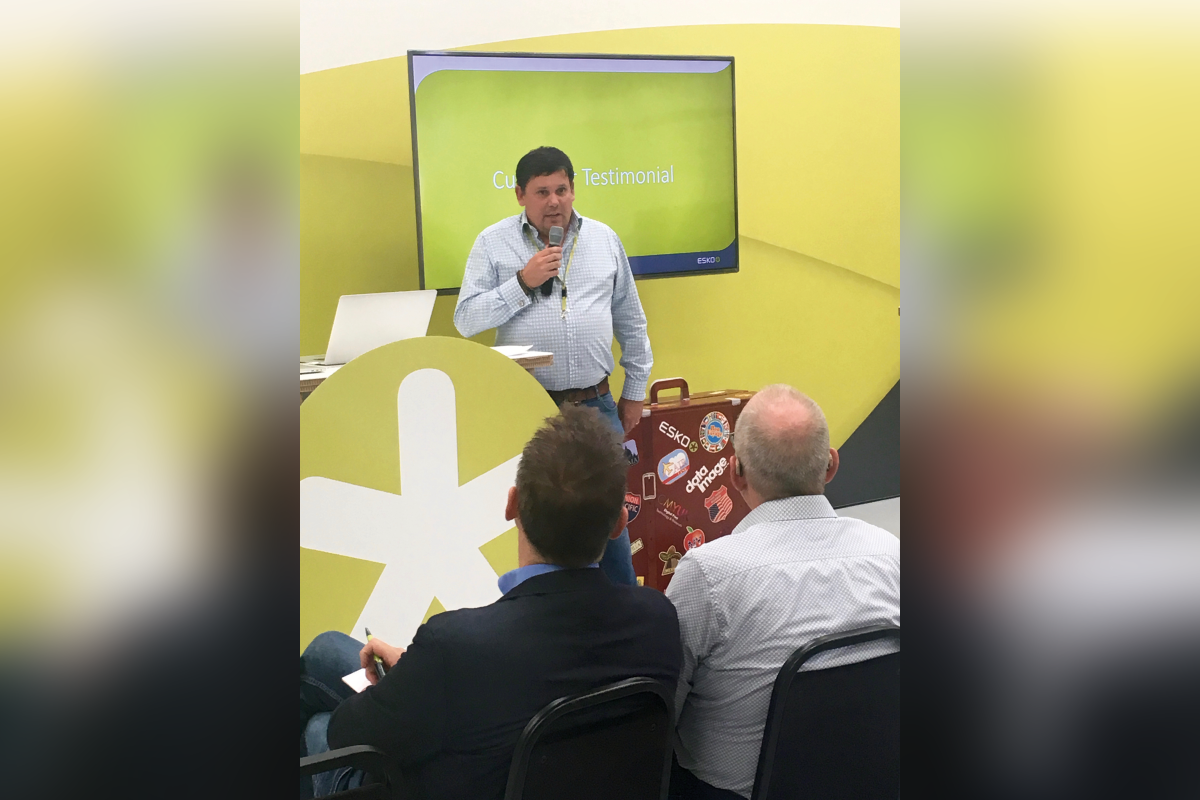 Last summer we brought you a story entitled ‘war on waste’, looking at the value stream mapping lean journey Data Image had embarked on with Esko to make its business more efficient. So what have its actions achieved a year down the line, and what’s its target now?

Data Image is on a heck of a mission - to grow turnover by 50% between April 2018 and April 2019. Think that’s a tough call? Then what about aiming to grow net profit by 200% in that same time period? Robert Farfort, MD of Data Image thinks both are achievable via a two prong manoeuvre that will see the Leicestershire-based PSP target new business and jettison some of the old. It’s all part of a master plan that’s really come out of a Value Stream Mapping (VSM) business analysis programme that started three years ago.

“The thing is to be brave - and to understand where the money is,” says Farfort, speaking on a day earlier this summer when he was co-hosting an open day with VSM partner and hardware supplier Esko to show off new robotic capability at what is currently a £6m turnover operation, and to flag up the ROI potential of investing in software as integration and strategic business tools.

“Building business is not about grabbing every opportunity,” Farfort expounds. “It’s knowing what counts. A good proportion of what we’re doing with VSM is understanding the numbers within the business and what the data tells us is real rather than mere gut feel. It’s about being strategic and understanding who our ideal customer is, then asking whether existing ones fit that profile, and which new ones to go after. We have jettisoned a substantial amount of customers so far!”

That might be scary stuff but as Farfort points out: “It’s all about making money. We don’t want to grow just turnover, but net profit. A lot of that comes down to efficiency, really what VSM is all about.” (A VSM outline is in the 2017 article: http://bit.ly/2l93mBY).

In the 12 months since Image Reports first spoke with Farfort and Esko on the VSM programme being undertaken by Data Image - at which time an action plan was being drawn up by a small team of key management to deal with key inefficiencies data gathering had highlighted - there has been “constant improvement” across the company, where there’s now also much wider staff involvement.

“One person from every department of the business is now on the VSM team, which reviews the action plan every 30 days, though some points are looked at daily,” says Farfort, adding: “We constantly tweak the action plan as required. From the VSM dashboard we can see what the biggest issues and frustrations are of the business. The action plan is to investigate what the problems are, how frequent they occur and put that on a ‘frequency frustration map’. From that we know where to concentrate our efforts.”

So what’s proved the biggest frustration over the last year? Farfort says it’s most definitely the quality of information supplied - or rather not - into the business by customers. “They all want jobs delivered tomorrow but don’t supply enough detail. So our focus has been on utilising Esko WebCenter to better effect.

“We already had it, but hadn’t really implemented it fully. Buying a solution like that can actually be the smaller cost to a business - a lot of time and effort goes into implementing it. It takes real effort to educate customers to use it and that can be a hard sell so you need to devote time and energy to get any real payback. Still only a small percentage of customers are using it, but that number will grow. We think that of all the actions we’ve undertaken since the VSM meeting in summer 2017, that this will give us the biggest result by improving the level of good information we get coming in.

“Also, as we grow new business we’ll have the conversation about using WebCenter up front, so having it will become a USP - after all, customers can track their jobs etc. and they like that.”

But Farfort understands why many a PSP baulks at the idea of doing what he’s doing: “Through VSM we are refining factory layouts and consolidating processes to make us a more efficient and focused business. It’s all about integration and having as few touchpoints as possible and that will pay dividends - the ROI is huge, but it’s not a tangible asset. It’s true that implementing a lean process/structure costs serious money and time. Our software spend over the last five years has been £100,000 - £150,000 [covers Rips, workflow, colour management, accounting etc.] We’re constantly doing demo’s to show off integrated systems but the biggest reaction we get from competitors is ‘wow, that’s a lot of money’. They’d rather buy a new printer.

“I think lots of those running SME’s in this industry start out with a passion for print and haven’t been ‘business trained’. They have no clear strategy of where they want to be or how to get there. There’s this idea that print is lovely, tactile stuff, but we’ve got to become more hard-nosed and become data driven. We are in print, but we’re not printers - we’re business people. VSM has focused our minds on that.”