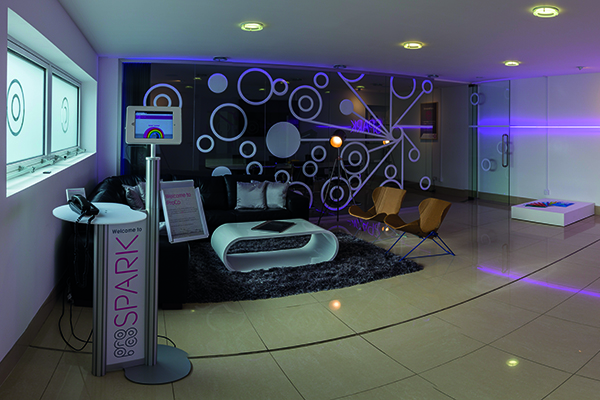 Here’s the spark of an idea - lets get printers and suppliers from across the print sector to use a communal space for educational, knowledge sharing and networking purposes. There’s a facility in Stansted set aside for just that purpose, but without input from across the industry, what is a bright new shiny space, offering the first of what ProCo CEO Jon Bailey hopes will be an expanding range of courses and events, it will “quickly become a museum.” That’s because he acknowledges that the £15m turnover company cannot on its own forever fund what it has called ProCo Spark. And as he points out: “ProCo will benefit from the initiative of course, but we’re not just doing it for ourselves, we’re doing it for the whole print network because we need to do something to ensure that print stays relevant.”

He explains: “We as an industry are letting ourselves down. A lot of people offer ‘educational’ open days or whatever, but it’s often done for the wrong reason - just for lead generation or whatever. I was wondering why I still get asked this and that about digital print production issues when I’ve not been hands-on for 15 years. I have people to deal with that. But I realised it’s because I know where to go to get answers. I can ring people today that I networked with when I was coming up through the ranks. We learned together and formed personal relationships - you don’t see that now. It’s our own fault.”

So Bailey’s doing something to put things right via ProCo Spark, which he admits has - as yet - no large-format bent. But he hopes that will change as the initiative attracts more participants. The project only really got off the ground at the start of this year, with ProCo

furnishing a dedicated unit at its small-format orientated production site in Stansted. It houses working digital presses and finishing kit, an applications sample suite and “white room experience where 15 - 20 people can plan a customer journey from start to finish”.

ProCo is working with the BPIF in regards to school visits for hands-on and virtual experiences, and it currently runs four courses “from print basics onwards for anyone who wants to take them”. All ProCo staff will undertake all the courses in the next 12 months, and customers can attend alongside their account managers.

These initial courses are small-format orientated, and that’s because Bailey says, “we’re not in a position to be an educator in the large-format market ourselves, but we’re happy to be a facilitator and work with others who would like to use the space to run such courses.”

ProCo has handled large-format in-house, and farmed out work, for clients for some time but only as a small proportion of its business. Bailey says that it decided to increase its in-house large-format capability when it got to the point where it was outsourcing £2m worth of POS - the result being investment in two Agfa Anapurnas and finishing kit for its Sheffield site a couple of years ago. “But we don’t want to become a large-format specialist or produce it all in-house,” says Bailey “We don’t have any customers who come to use just for large-format either. It’s just about us efficiently supporting our customers as a solutions provider.”

Given that, it’ll be no surprise to hear that at the moment, the kit within ProCo Spark is small-format, but Bailey is open to the idea of large-format kit being brought in as part of the mix. “If a supplier wanted to get involved and put kit in there so they could bring prospects and show the possibilities, all well and good. Media suppliers likewise. I’m open to ideas.

“ProCo Spark is about learning, but its more than that, it’s about bringing people together and building relationships. The thing is, there is a gap in knowledge. Customers over the years have turned to online and digital media so print knowledge has deteriorated. But now they’re realising digital is rubbish and coming back to print, but they don’t understand what’s possible etc. Also, people like me listened to all that messaging about recruiting people with a customer services background because print was becoming deskilled, so the technical courses dropped off and we taught people in-house. That’s OK, but it means the younger staff don’t have the breath of knowledge and contacts we oldies had.”

Bailey wraps up: “I read that companies with their own innovation centres are more effective, but I know not a lot of PSPs or their customers can afford their own. So the intention is that ProCo Spark becomes a communal hub. If ProCo only uses the facility one day a week and the other four days it is used by others, that’s great.”