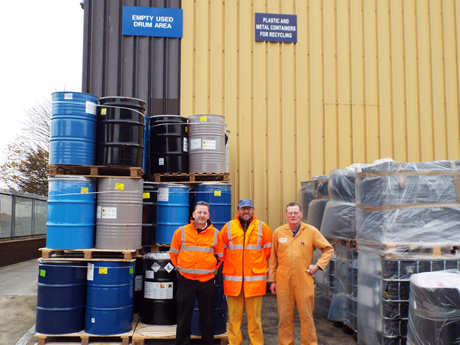 When it comes to environmental credentials and programmes, the wide-format sector can hardly claim to be at the forefront, despite all the pro-green arguments.

So it was great to see, at the start of 2015, that Fujifilm Speciality Ink Systems’ Broadstairs-based manufacturing facility for UV wide-format (and screen) ink had won the 2014 ‘Sustainable Innovation’ award from the British Coatings Federation (BCF) – an award that recognises and promotes “outstanding innovations within the coatings industry that have the greatest impact on the sustainability of the supply chains in which the industry’s products, processes and services play a key role”.

FSIS - which has held the ISO14001 Environmental standard since 1998, is an accredited Sony Green Partner, and received Soil Association certification to the Global Organic Textile Standard for its products used on textiles – sees the value in taking its environment responsibilities seriously, and has applied for the BCF award before and been a finalist. It became a winner in 2014 for a number of innovations and developments at the new plant, which opened in 2013 as the result of a 4m+ Euro investment by FSIS to deliver product to consistently high standards and with a reduced environmental footprint.

Colin Boughton, operations director at FSIS, explains: “In 2005 53% of our waste went to landfill, and by 2007 21% went to landfill. In July 2013 we achieved zero to landfill through a new initiative to work with a company to use our remaining 2.8% of waste from the R&D laboratories in glass jars as a component in road surfaces.

Indeed, all areas of waste have been attended to. For example, where previously FSIS had scrapped 5,300 x 200litre drums each year, it now reuses them as part of a closed loop recycling scheme, a move that has allowed the plant to stop purchasing drums for its own use, with an overall saving of £44,000 per year.
And then there’s the plant’s Right First Time (RFT) lean manufacturing programme to consider. FSIS currently manufactures around 6300 tonnes of product that is shipped to 86 countries around the world. Pre-press products for the screen industry are made at Broadstairs as well as approximately 80 ink ranges with around 1500 formulations. It uses 850 raw materials from just under 300 raw material suppliers, and houses 140 different packaging items on site, indicating the complex nature of its business - and environmental challenges.

The move to the new plant however, provided certain opportunities to face these challenges head-on. A bespoke heat exchange system was introduced that enables ‘waste’ energy, in the form of heat from production processes and compressed air generation, to be used to provide 70% of the heating required for the factory. In addition, new modulating condensing boilers use 40% less fossil fuels than conventional heating systems.

“The move was the chance to install new lighting, new compressors and new heat recovery systems. All these contributed to a reduction in our energy costs, but the major initiative was our very high RFT figures,” stresses Boughton.

The idea behind RFT is obviously to eliminate the need for any modifications or reprocessing, an approach that is key to FSIS’s lean manufacturing programme. “As product batches didn’t require reprocessing or waiting at testing it meant we could run the plant on one shift rather than two as our up-time on the equipment was significantly increased,” says Boughton. “Add to that initiative our heat exchange and ‘Zero to Landfill’ approach and FSIS is not only green but truly sustainable.”
Boughton is happy to expand upon that last comment: “Sustainability sometimes just concentrates on environmental issues such as energy or waste, but our transition of the business from an analogue supplier to a major digital inkjet supplier has been a model in moving from one technology to another...and not many business survive that transition. They may achieve a technology move by merger or acquisition but not many actually do it from within their business. I don’t think the ‘securing the future of the business’ can be overplayed. The transition of the business was a major opportunity for us to do that.”