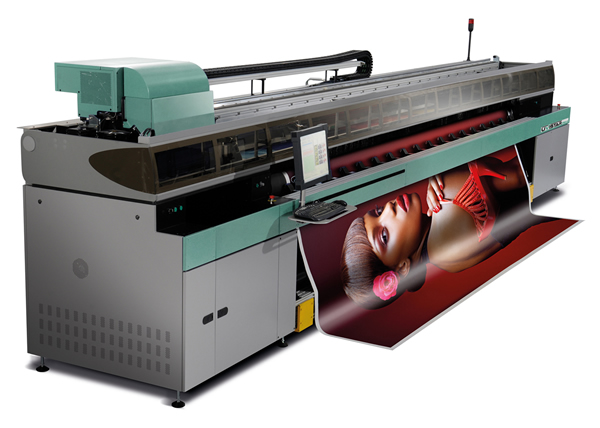 How China-based Aria has been working closely with Fujifilm to provide a PE offering that is a more environmentally-friendly alternative to PVC.

“When green printing is the goal, it is all about developing the right synergy of substrate, printer, ink, and software.” So says Craig Adams, president of Aria, a company that has and continues to work closely with Fujifilm to develop an inkjet printable PE (polyethylene) substrate as an environmentally-friendly alternative to PVC for banners, billboards, signs and displays.

Known originally as Aria Tex when production started back in 2009, and now being marketed as Aria Flex, it’s a material that the company believes “holds the key to a more sustainable future”. That’s a big claim, but one Aria is working hard to make stack up – largely through partnership R&D – and through the establishment of its own Aria Print Centres that provide finished print on the material for customers worldwide.

Aria is part of the China-based YJ group which has been in business for around 35 years and been making woven polyethylene (PE) all of that time. But development on Aria Tex began in 2007 with production starting two years later. The product name change to Aria Flex came about Adams explains, because “we noticed that the industry seems to prefer ‘flex’ when referring to PE, and ‘tex’ when referring to materials that are made from polyester, polycotton, and other textile fabrics.”

PE in general has plenty going for it: it’s lightweight, it can be recycled, it’s chlorine free, and it’s printable with latex and UV-cured inks. And via its collaboration with Fujifilm, Aria believes that Aria Flex in particular will make a significant impact in the large-format inkjet space.

But the relationship between Aria and Fujifilm is no standard customer/supplier one. The Uvistars already in-situ at Aria Print Centres have been used in a test production environment in combination with the Aria Flex fabric over the last few months. And for around five years Fujifilm has been buying Aria Flex for its own distribution. Co-operation and information sharing between the two parties has enabled Aria to refine its PE substrate.

Adams says: “Before setting up the Print Centres we did a review of large-format digital printers. We favoured the speed, efficiency, and quality of Fujifilm’s Uvistar. The Uvistar also seemed particularly capable at handling Aria’s lightweight materials. The Fujifilm team was extremely helpful to us throughout this evaluation process. This synergism has continued, eventually resulting in a process or ‘ecosystem’ where machine, ink, and Aria Flex are optimised.”

The Aria Print Centres use Fujifilm's standard Uvijet QN standard UV ink on Aria Flex, which has been specifically engineered for the digital printing market.

In the selection of the Uvistar Pro 8, Adams sought the advice of Dr. Nicholas Hellmuth, publisher of the Flaar Reports, for his evaluation of the printer. And Fujifilm took the time to test various ink and Rip settings until they had a perfect recipe that worked well on the Aria PE.

Adams adds: “The overall cost per m2 of print is also essential to the viability of this project. The Uvistar proved to be the most cost effective solution by far for our particular set of applications.

“Over the past few months, we¹ve been using the first four of our eight Uvistar printers to rigorously test Aria Flex’s compatibility with Uvijet inks and the Uvistar Pro8 platform and the results so far have been nothing short of outstanding. Over this time, we have produced an extensive range of products for our customers, including one of the largest global outdoor media companies, which now has a selection of banners and signage out in the field produced on Aria Flex.”

With two models (3.5m and 5m) and a throughput speed of over 350m2/hr, the Uvistar series has rigid and multi-roll media handling capabilities. Manufacturer Fujifilm worked closely with Aria Print Centres throughout the installation and product testing process, including building new bulk feeding systems to accommodate the specific attributes of Aria Flex, something Adams says has been crucial to the overall success of the project.

He continues: “PE is a natural replacement for PVC and a very exciting development for the industry. Fujifilm understands what we want to achieve and our commitment to it, and has worked closely with us to ensure maximum synergy between substrate, inks and machine. The result is a product that has exceeded ours and our customers’ expectations so far. It¹s like a meeting of minds, and we¹re very pleased to be working together with Fujifilm.”

One high profile convert is Cactus Imaging in Australia. The company bought its first Uvistar a year ago and has been using Aria Flex with it. Company president Keith Ferrel says the m2 cost is actually better than expected and attributes this to efficiencies inherent in the system as a whole - the Uvistar printer, Fujifilm ink, and Aria Flex.

Aria flex PE material is manufactured in Zhongshan, China and distributed in the UK through YJ’s European facility in Ipswich, Suffolk, England. The company’s website says it is creating a network of recycling plants for the material but at the time of writing this was still in development. Watch this space!