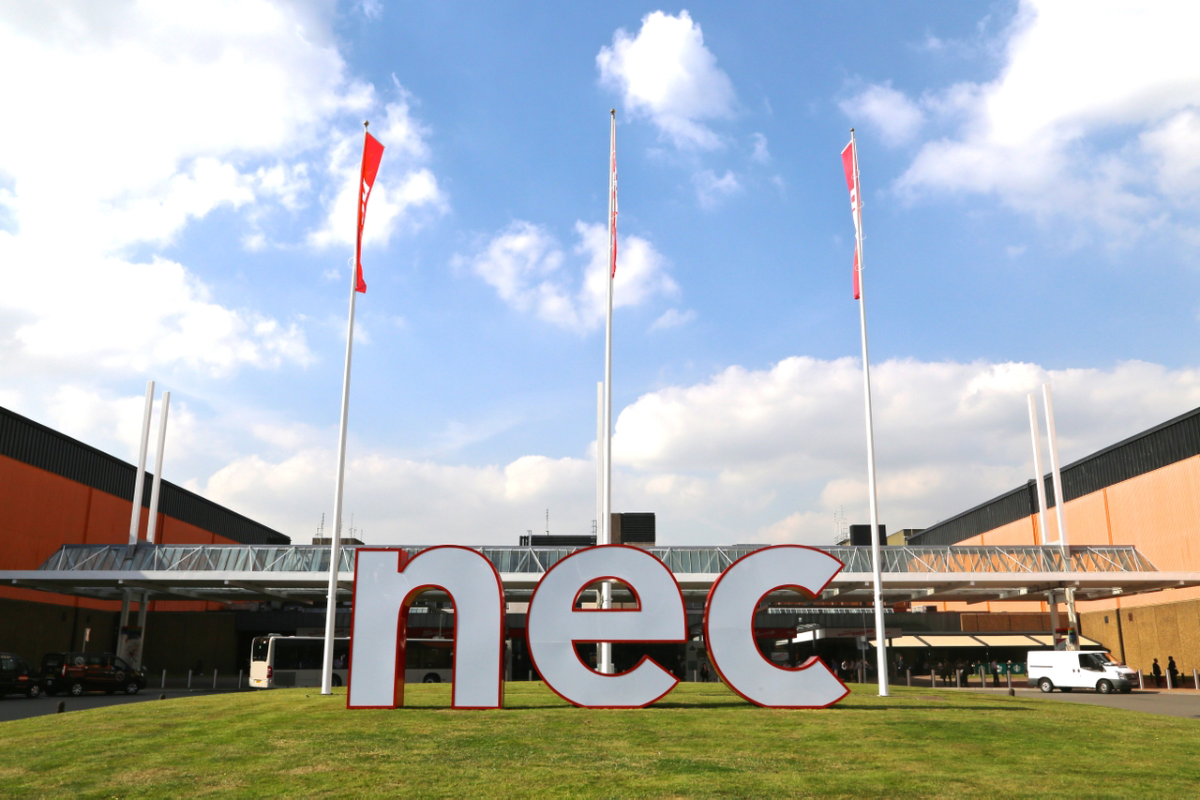 Will you be driving to Birmingham for Sign and Digital UK or flying to Berlin for Fespa Global Print Expo 2018? We bring you the low-down on both to help you make the call.

Yup, it’s that time of year again. Sign and Digital UK and Fespa Global Print Expo 2018 are practically upon us. So are you going to one, or both? No doubt you can get online to check the basic info about each show’s format so I won’t duplicate it all here, but there are a few things worth pointing out to those of you still wavering about attending.

First show first then - and you’ve got to give it to the organisers of Sign and Digital UK for nabbing Mary Portas, ‘Queen of Shops’, to deliver the keynote address in keeping with the show’s 2018 theme ‘creativity brought to life’. The retail/branding expert - who will take part in a subsequent Q&A and tour the show floor on the opening day - says that “with my Sign and Digital UK audience I will aim to cultivate a new confidence in diversification. I look forward to rallying with business leaders from these adapting sectors and offering advice among small business owners who are looking to explore ways of getting ahead of their competitors.” Get in there.

Surprise, surprise, Fespa 2018 too will have new show features! In line with what Fespa CEO Neil Felton says is its duty to ”inspire, educate and grow the speciality printing sector” we will see a new ‘Print Make Wear’ fast fashion/ garment printing showcase/seminar programme, as well a new ‘Digital Corrugated Experience’. Both are designed to encourage new visitor types to the event and have been earmarked as natural tangential markets for the Fespa community

‘Print Make Wear’ will take form of a live production environment highlighting every step in the screen and digital printing production process, from initial design to finished product. A fashion catwalk will provide the ‘wear’ part of the equation. Non-fashion textiles production kit will be spread throughout the main show.

The ‘Digital Corrugated Experience’ will combine short seminars and business-building discussions with suppliers to the sector.

Fespa 2018 will also boast a new Printeriors format to better showcase possibilities in printed decor. Drawing on the show’s ‘take off’ campaign, it will be themed ‘airport lounge of the future 2030’ and take the form of room-sets in the atrium of the Messe Berlin.

Fespa has also amalgamated the seminar streams for the 2018 event. The whole programme of free talks will this year take place in one location - the Trends Theatre.

Off site, Fespa will announce the winners of its awards at a gala dinner on 16 May - entries will be on show at the messe. European Sign Expo - for non-printed signage - will again run alongside the main event.

The Trident hybrid CNC combined routing and cutting print finishing system will be shown by AXYZ International, which will also showcase its 24/7 tools and accessories online resource. This constantly upgraded facility accommodates the requirements not only of AXYZ and Pacer routers but also virtually any other machine regardless of make or country of origin.

New and recently launched plotter/cutters will be running on the latest Graphtec Pro Studio dedicated software. This is based on the FlexiSign family of design and production software developed by SAi for which Graphtec GB is a preferred business partner and distributor in the UK and Ireland.

A new addition to the CE series of roll-fed machines will be the entry-level CE Lite-50. It has a cutting speed of 500mm/sec, a 50cm-wide roll media handling facility, and incorporates Graphtec’s latest proprietary Version 7 of ARMS (Automatic Registration Mark Sensing)

For the first time, Mimaki distributor Hybrid will show the entire range of Mimaki’s UCJV Series LED UV printer/cutters alongside solvent printers and printer/cutters. In addition to its main stand, Hybrid will also be running the Textile Printing Live Demo feature in hall 18.

The show will act as the UK launch platform for the Jetrix KX6U-LED printer which Joey Kim, MD, InkTec Europe, says: “heralds the arrival of a new suite of LED printers where we are looking to offer a range of various sizes and formats.”

As a Roland DG reseller QPS will provide the first UK demonstrations of the new VersaExpress RF-640 with ID-64. The 64in-wide printer uses a UVL ink to produce instantly dry output. Chris Bailey, QPS MD, says: “Thanks to its low power requirement, lower ink costs, and non-consumable printheads, it comfortably returns savings of around 65% when compared directly with latex output.”

As the main UK distributor for Nazdar inks, QPS will also host the company’s Ink Answers Live at the show

“Getting back to basics with our Print Collection will be a real focus on our stand this year, says MD Mark Mashiter, pointing out that speciality products such as SoDecor printable wall coverings and G-Floor are now included. Artist Emily Campbell of Blue Butterfly Flooring will be at the show to highlight the creative side of the latter.

The recently renamed William Smith Group 1832 will have two stands: stand L36 will be divided to provide demonstrations of the latest vehicle wrapping and architectural decorative and special effect films; on stand L40 the recently formed Smith Sign and Display division will showcase the service and manufacturing capabilities available to the trade.

Zund will be running one of its S3 M1600 cutters for roll and rigid materials on the Canon stand (H10) to demonstrate workflow capabilities with its printing equipment.

The finishing specialist will also have its own stand where it will show three cutting tables configured for different applications: a G3 3XL1600 will demonstrate textile finishing; a G3 L2500, fitted with the RM-L 3.6 kW router module, will highlight routing and polishing capability; a S3 L1200, fitted with a robotic arm, will flag-up automation developments.

At Fespa 2018 gold sponsor Aleph will present its LaForte Studio Paper 340, a machine designed to fulfill what it sees as a demand for the use of dye-sublimation paper on wider format. It reaches a speed up to 600m2/h at maximum resolution and features a patented rotary belt with air vacuum system.

Aslan will introduce a new glass decoration film - EtchedBoard Dyrapply Aslan EBL 300. This combines two functions in one - due to its surface that can be written on any number of times with whiteboard markers, the film can be used to create decorative privacy screens as well as presentation and communication surfaces.

Stand C48 will host workflow from design request through to finished and shipped product. It will demo Automation Engine QuickStart for Sign software - a turnkey workflow solution that automates prepress that enables companies to handle more jobs faster. Kongsberg’s Automate solutions will also be shown as will a Kongsberg C60 cutting table equipped with a feeder and stacker.

On stand D30 the focus will be on solutions for the digital corrugated sector. For the first time, Esko will demonstrate its ‘WebCenter QuickStart for Corrugated’.

Lintec Europe hopes to raise awareness of sustainable manufacturing practices and will highlight Re-Pop RE505S Recycled - a clear, lightweight, dry apply film aimed at the POS and retail markets for short-term promotional campaigns. Re-Pop is Lintec’s first film to be manufactured with a minimum of 80% recycled PET material.

The new models print up to 1200dpi and have a four or seven-colour (CMYKLcLmW) configuration. They use Greenguard Gold certified LUS-170 LED-UV inks, have a new ID Cut function for automatic cutting of consecutive jobs via barcode, and four-layer day and night printing to allow designers to build layered, transformative graphics for backlit applications.

Last year Roland DG introduced a new generation of professional vinyl cutters to its Camm1 series, the Roland GR-640/540/420. The GR series has been totally redesigned to deliver increased accuracy, speed, media versatility and more cutting features. Models (available in 1651mm, 1397mm and 1075mm cutting widths to allow users to pair them with inkjet printers in use) will be on show.

See the new Over Cutter Camera OCC, which provides fully automated registration that adjusts for position, stretch, or distortion in seconds.

Zund will also show the G3 3XL-3200 digital flatbed cutting system in combination with the LM 100W Cut and Seal Laser Module. The system can handle rolls of fabric up to 3.2m wide. For automated processing of large-format rigid substrates Zund will show an integrated production line with a D3 cutter and the Board Handling System BHS. Zund will demo fully automated routing technology too.