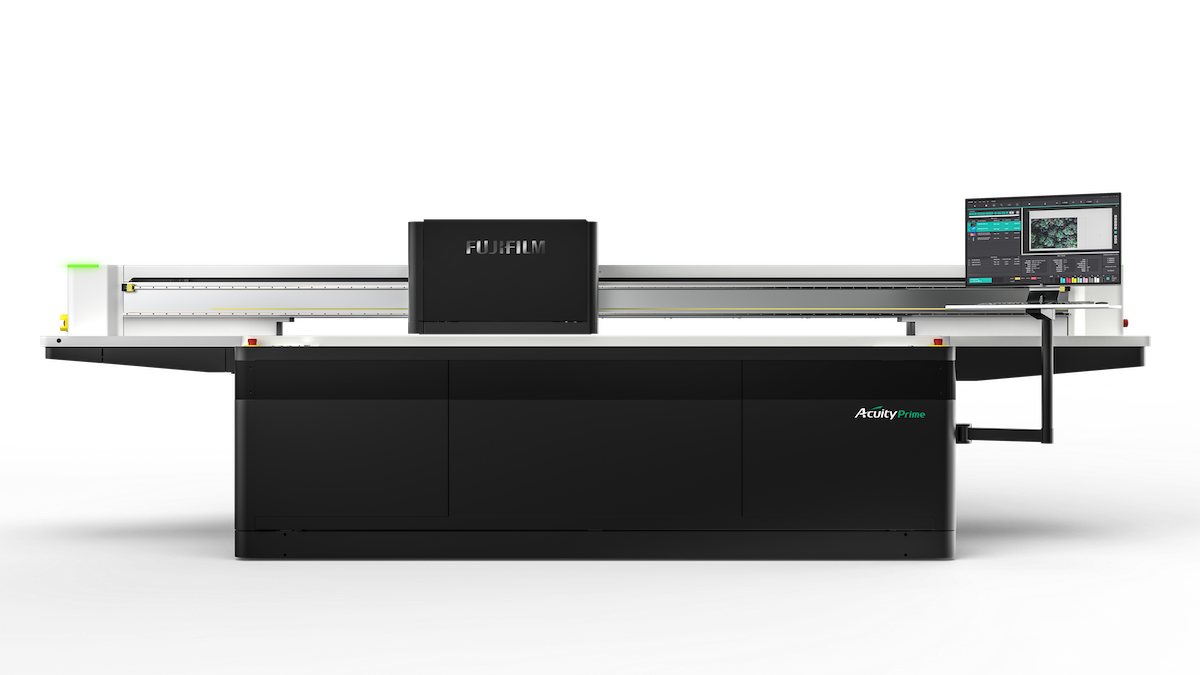 The new Acuity Prime and Acuity Ultra R2 flatbed printers from Fujifilm are part of a strategy to create “the new blueprint” for wide-format by resetting expectations for price/performance and ROI.

“We realised three years ago that the market had reached a tipping point - a point at which more of the same, with minor improvements, was no longer enough. The market needed something fundamentally new. So out of the Fujifilm R&D and development centre in the UK, where the concept of wide format UV inkjet first became a reality two decades ago, we set out to create just that - something built out of our heritage and long experience, but at the same time, fundamentally new,” said David Burton, business director, Fujifilm WFIJ HQ and marketing director, Fujifilm WFIJ EMEA.

“We made a strategic decision to rethink our Acuity wide-format offering, focusing on new ways to deliver improved value, versatility and ease-of-use and, in particular, on defining a new benchmark for print ROI. We set out to do what we had first done back in 1999 - to create a new blueprint for wide-format.”

The Prime - which has a printable area of 2.54m x 1.27m and can accommodate media up to a thickness of 51mm – is available in CMYK formats with white, and with additional clear and jetting primer. It uses a new ink system called Uvijet HM, which has been formulated for adhesion to a range of substrates while delivering a wide colour gamut. A new jetting primer improves adhesion further for particularly challenging substrates.

A splash-free ink pouch system is designed for easy changeover and incorporates an LED light system to alert the operator of low ink levels.

The Prime uses a LED curing system that is air-cooled, meaning there is no requirement for a water-cooling system. From an energy perspective it requires a single-phase 25-amp supply to help keep running costs to a minimum.

The printer incorporates touch-button media loading pins and has a five-part media zone system, based on common media sizes, to reduce the amount of masking required.

The software and user interface have been completely redesigned to give all the tools required in the most straightforward way possible.

There’s an integrated shelf for operator tools, and a cabinet built into the space underneath the front of the machine.

Fujifilm WFIJ marketing manager Anda Baboi said: “The Acuity Prime represents both a next step and a new start for Fujifilm. It’s the new blueprint for wide format. The thing that really sets it apart from anything we have brought to market before is the extent of the creative freedom we have had over every aspect of its design and development. Having this level of control has given us the opportunity to address a huge number of practical and technical issues, ensuring that the end product offers unbeatable standards of performance; exceptional value, versatility and ease-of-use, and the best ROI available on the market.”

The Acuity Ultra R2 replaces the Acuity Ultra launched in 2018. Available in 5m or 3.2m versions, it is of a new enclosed design to eliminate stray UV light, while from a functional point of view the machine is designed with both maintenance and ink supply on the same side. A light alerts operators to low ink levels.

The Acuity Ultra R2 also features larger ink tanks, that have been designed for easy refills. Maintenance-free ink pumps have also been integrated into the machine. A window allows the operator to check on the progress of a job without leaving the workstation, which has itself been redesigned with a desktop space, a drawer, lighting, and a larger monitor. The separate chiller unit that accompanied the Acuity Ultra has now been integrated into the new machine too.

The new printers are the product of the Fujifilm Design Centre working with an industrial design company and three years of market research and development. Four design criteria emerged from the research process which helped to inform design choices, to identify the right manufacturers and suppliers to work with, and the right OEM partners to help to bring it all together. Fujifilm said it made choices based on answering questions like “does it do what it needs to do?” or “could it be done better?”, and that  nothing was left unchanged that could be improved.